Justice for Jayaraj and Bennicks: Rajinikanth Condemns the Horrific Incident, Calls their Family to Offer his Condolences

After South stars like Samantha Akkineni and Kajal Aggarwal, superstar Rajinikanth has condemned the horrific death of Tuticorin father-son duo, Jayaraj and Bennicks. 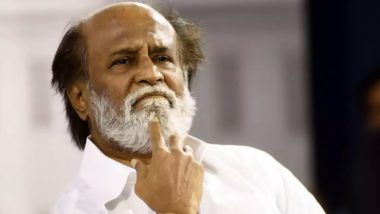 While Indians were actively participating in the #BlackLivesMatter movement on social media after African-American George Floyd's death in the US stunned the entire world, little did they know they would witness a similar incident in their own country. #JusticeforJayarajandBennicks is currently gaining momentum in India after the horrific deaths of Tuticorin's father-son duo Jayaraj and Bennicks. The incident has started the entire nation and made us question the brutality of the police force. Tuticorin Custodial Deaths Case to be Probed by CBI, Will Seek Permission From Madras HC: CM Edappadi Palaniswami.

While the citizens have demanded severe punishment for the culprits and justice for the duo, celebs have also raised their concerns against this monstrosity. After celebs like Kareena Kapoor Khan, Janhvi Kapoor in Bollywood and Suriya and Kajal Aggarwal in the south, Rajinikanth has now condemned the incident and consoled his family via a call.

The Petta actor's publicist Riaz Ahmed took to Twitter to confirm the news and shared a photo of the father-son duo. He revealed that Rajinikanth spoke to Jayaraj's wife J Selvarani and consoled her. He wrote, "#ThalaivarRajinikanth conveyed his heart felt condolences to Thiru #Jayaraj's wife, Thiru #Bennix's mother over a phone call @rajinikanth (sic)."

The duo's family has suggested that the victims were physically tortured by the police and they had later suffered many injuries. While Bennicks died on June 22, his father succumbed to his injuries on June 23. Records from the Kovilpatti sub-jail hospital indicate that the father-son duo had severe injuries on the gluteal region. Besides, Bennicks's knee caps were pressed due to the torture inflicted on him. Tuticorin Custodial Deaths: Parineeti Chopra, Taapsee Pannu, Priyanka Chopra and Other Bollywood Celebrities Champion #JusticeForJeyarajAndBennicks (View Tweets).

The duo was picked by the cops from the Sathankulam police station after they had a heated argument for opening their mobile shop beyond the permissible hours. Authorities in Thoothukudi told media that two sub-inspectors have been suspended and a probe is underway into the alleged custodial deaths of Jayaraj and his son Bennicks

(The above story first appeared on LatestLY on Jun 28, 2020 06:33 PM IST. For more news and updates on politics, world, sports, entertainment and lifestyle, log on to our website latestly.com).