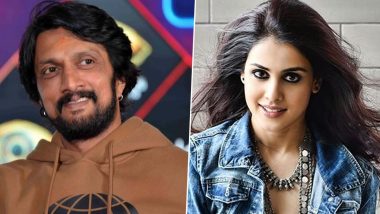 Genelia Deshmukh is one of the popular actresses of Indian Cinema. She has acted not only in Hindi films, but also in Tamil, Kannada and Telugu films. Today (August 5) it’s her birthday and from family to industry friends to fans, all have been showering the actress with heartwarming birthday wishes across social media platforms. Kannada actor Kichcha Sudeep, who has also done a few Hindi films, has extended birthday wishes to Genelia. Genelia Deshmukh Birthday Special: 10 Pictures Of The Actress That Are All Things Cute, Chic And Charming.

Kichcha Sudeep wished Genelia Deshmukh by saying, “Wishing you all the happiness @geneliad ... Continue to spread smile like you always have where ever you go. Much luv always . Happy returns.” The actress responded with a sweet post that read, “Aww thank You so much @KicchaSudeep .. So sweet of you..Smiling face with smiling eyes .. Hopefully we all get to connect soon.” Riteish Deshmukh Pens a Birthday Wish for 'Baiko' Genelia Deshmukh, Says 'Growing Young With You is a Blessing'.

Aww thank You so much @KicchaSudeep .. So sweet of you..😊 .. Hopefully we all get to connect soon https://t.co/feNL7UCXGn

Genelia Desmukh is married to actor-producer Riteish Deshmukh and the couple has two adorable kids. The last film in which she had played the lead role was in the 2012 Telugu flick Naa Ishtam, in which she shared screen space with Rana Daggubati. In 2018, Genelia had made a cameo appearance in the Marathi film Mauli, featuring Riteish Deshmukh and Saiyami Kher in the lead.

(The above story first appeared on LatestLY on Aug 05, 2020 01:20 PM IST. For more news and updates on politics, world, sports, entertainment and lifestyle, log on to our website latestly.com).