Sreenivasan Birthday Special: From Nadodikattu to Udayananu Tharam, 11 Nostalgic Characters of This Fine Actor That Malayalis Can’t Get Enough Of! (LatestLY Exclusive)

The evergreen versatile and multi-faceted Sreenivasan is turning 65 on April 6, 2021. So on the occasion of this birthday, we list 11 of our favourite nostalgic characters memorably played by this wonderful actor with an excellent sense of self-deprecating humour. 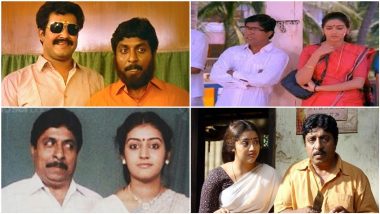 The evergreen versatile and multi-faceted Sreenivasan is turning 65 on April 6, 2021. He may not be as active in cinema as he was a couple of years back, owing to health issues, and has found himself in news for all wrong reasons, due to some of his controversial statements. While his sexist overview in recent times can't be disregarded, neither can we ignore the rich lore of characters, stories and dialogues that came out of his penmanship, a few characters played to immortal perfection by the man himself. 7 Malayalam Movies of Mohanlal, Jayaram, Sreenivasan That Were Remakes but Arguably Better Than the Original.

Along with the likes of Lohithadas, Padmarajan, Ranjith et al, Sreenivasan had a huge contribution to the golden age of Malayalam Cinema which falls between the late '80s and the early '90s. Some of the memorable movies of that era has been penned by him, while Sreenivasan himself took on roles - be it the flawed leading man, the cunning anti-hero, the sympathetic underdog or the funny guy - that remain embellished in the hearts of Malayalam movie buffs for years now.

So on the occasion of this birthday, we list 11 of our favourite nostalgic characters memorably played by this wonderful actor with an excellent sense of self-deprecating humour. 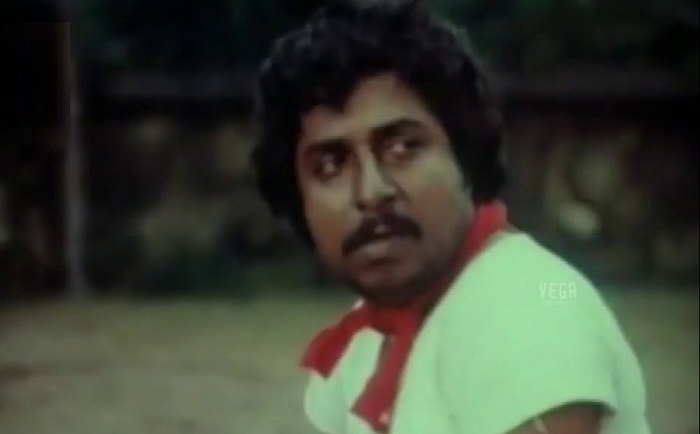 In KG George's brilliant satire, Sreenivasan plays a disabled beggar who is a bemused spectator to the crazy political play in his village. While he is good in the role, it is what the character stands for is what makes this role special, especially in the present times. For Sreenivasan's character represents the general public, who may feel amused by what politicians are doing to each other, but in the end, they turn out the biggest sufferers of the play, just like Kathavarayan's tragic fate at the end of the film. From Poochakkoru Mookuthi to Virus, 7 Times When Malayalam Cinema Handled Ensemble Multi-Narrative Movies in the Right Way! 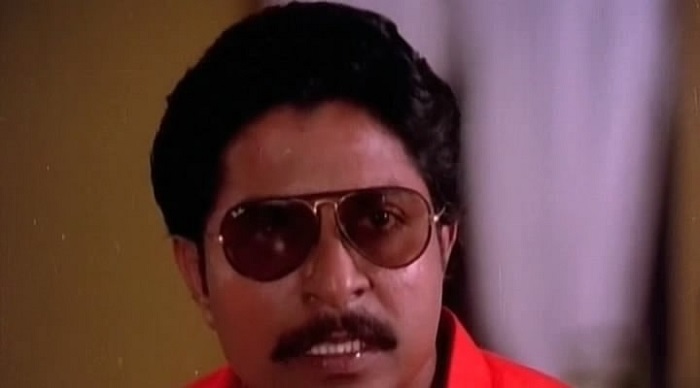 It is the name here that makes this character special in the first place, not to mention an iconic banter involving Sreenivasan, Mohanlal and Jagathy Sreekumar ("How many kilometres from Washington DC to Miami beach?"). The Priyadarshan film has laughs by the minute, with Sreenivasan's arrogant brat bringing up much humour with his haughty Westernised attitude (he even anglicises his real name "Madhavan") which also results in his comical downfall. 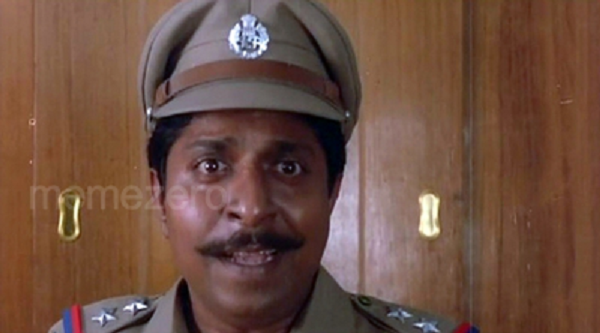 "Pavizhamalli Poothulanja Neela Vaanam" - how can any Malayali forget this evergreen song where an unabashed Sreenivasan tries to woo an uninterested Karthika in a park, while Mohanlal's character follows them! As the lovelorn police sub-inspector, Sreenivasan's role may not be big, but he makes every second of his appearance hilariously unforgettable! 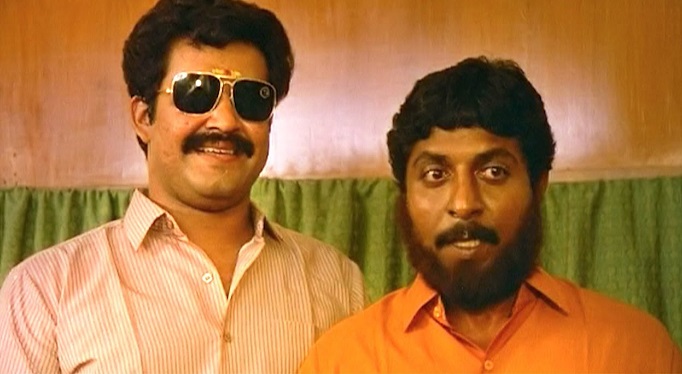 Mohanlal and Sreenivasan in Nadodikattu

Mohanlal and Sreenivasan is one of the best pairings in Malayalam cinema, and look no beyond the Dasan and Vijayan franchise for that (though there are other hundreds of movies that don't say otherwise). Be it Nadodikattu or Pattanapravesham or Akkare Akkare Akkare, their incredible chemistry shines well through their blow-hot-blow-cold camaraderie, glazed well by Sreenivasan's writing. Mohanlal Birthday Special: 5 Comic Roles and 5 Tragic Performances of the Malayalam Superstar That Will Mesmerise You Forever! 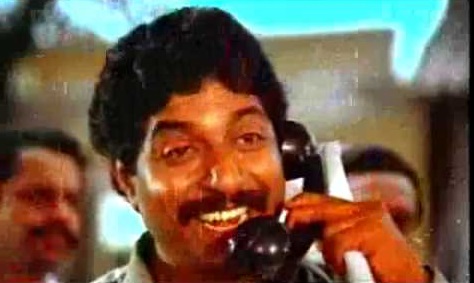 Priyadarshan's Mukunthetta Sumitra Vilikkunnu is a remake of Sai Paranjype's Katha, which itself is inspired by the tale of the hare and the tortoise. Maybe it is the Mallu in me, but I prefer the remake to the original, because it doesn't let the hare win over the tortoise. Also while Farooque Shaikh was excellently slimy in the OG, Sreenivasan takes the same role notches up while also raising the hilarity levels with his scheming Viswanath. 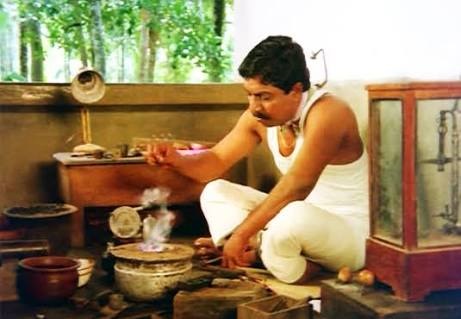 Sreenivasan can do the underdog characters really well, and his role of a poor goldsmith in this Sathyan Anthikad film is a fine example. Betrayed by the girl he once loved, Bhaskaran falls badly on his back, only to rise up on his legs again and seek a fresh lease of life, all the while bearing to see his former flame being the wife of another man just next door. 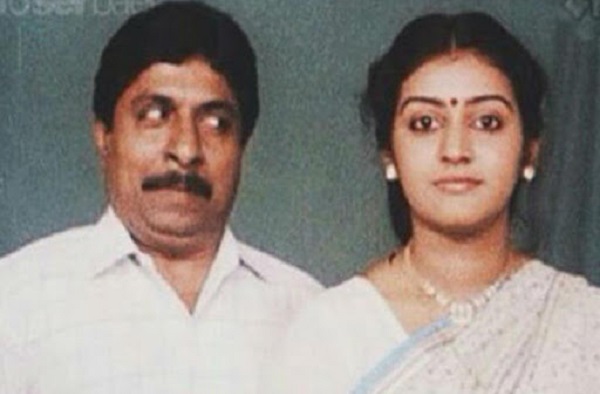 Sreenivasan and Parvathy in Vadakkunokkiyanthram

For some strange reasons, Sreenivasan has only directed two movies, even though both of them turned out to be family classics. And the funny part is that while he plays the lead in both the movies, his characters are far from being heroic. In his second film - Chinthavishtayaya Shyamala - he plays a school-teacher who shirks responsibilities. But it is his role in the first film that actually evokes sympathy in you, despite being a flawed man. Belittled by his family and suffering from inferiority complex and bad advice from well-wishers, his Dineshan himself wrecks his marriage to a lovely girl, for he, deep in his mind, thinks he never deserves her. What was to be a family film turns into a psychological drama, as Dineshan turns from over-pleasing husband to a suspicious partner shown through a tragi-comical progression. Before The Great Indian Kitchen, 7 Recent Malayalam Movies That Boldly Smashed Patriarchy, Misogyny and Sexism. 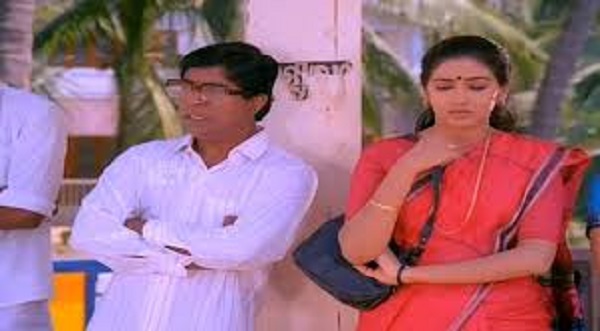 If Thalathil Dineshan's psychological problems came from his own complex, then poor Gopalakrishnan in this Viji Thampi film was an unsuspecting victim of a cruel prank played by his friends. Fed up with miserly attitude, his three roommates take advantage of his desperate nature and gets him catfished to a woman who is oblivious to his existence. From a figure to be mocked to be a broken-up man over his own imaginative romance, Gopalakrishnan evokes our sympathy in the latter parts of the film. 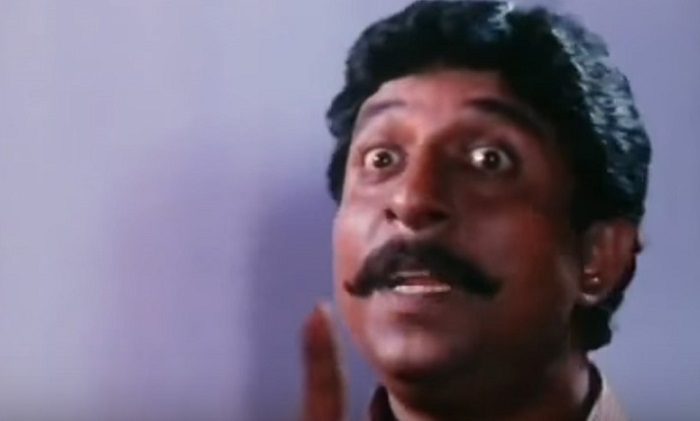 A surprising flop during its release, Sandesham has grown stronger and stronger over the years, and resonates brilliantly in current times and political milieu. Revolving around a family whose parents are fed up over their sons' frequently sparring political ideologies, Sreenivasan plays the elder son who is a worker of a party that resembles CPI(M), while Jayaram plays the younger brother, who is more of a Congress ideologist. Both the characters are used to make enough digs at what these parties have turned out to be, with some very clever satire, sparkling humour and a few surprising turns. Also, how can we forget the classic "Polandine patti nee oru aksharam mindhalle!" ("Don't say a word about Poland!")

Rosshan Andrews' terrific debut is a satire on Malayalam cinema industry with Mohanlal playing an assistant director trying to catch his first break, while Sreenivasan plays an opportunistic actor who betrays his friend to turn superstar. While Sreenivasan is OTT in the role, it matches with the expectations around the character - a bad actor relishing in his smarmy superstar image, but is later humbled by his own blind arrogance. The disappointing sequel, however, ignores his redemptive change and turns him into a caricature. 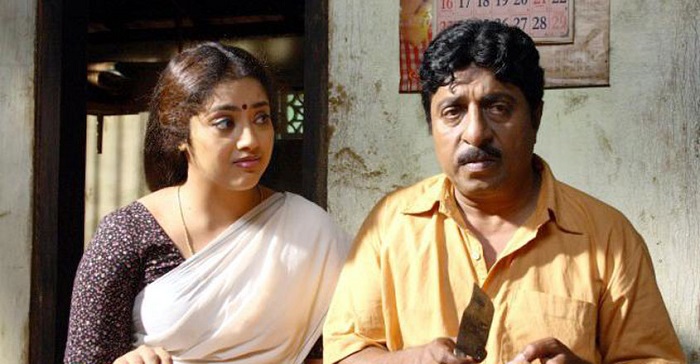 Meena and Sreenivasan in Kadha Parayumbol

This delightful film, produced by Sreenivasan and fellow actor Mukesh, is a nice spin on the classic friendship tale of Lord Krishna and his poor friend Sudama. Sreenivasan plays Balan, an impoverished barber in a sleepy village, who is suddenly the villagers' darling when they learn he once used to be friends with a superstar actor (played by Mammootty) who is shooting in the village. Balan, himself, is reluctant to rekindle his old ties, which makes both the villagers and the viewers distrustful of his friendship till that memorable climax wins our hearts. Kadha Parayumbol has also been remade in other languages, including in Tamil as Kuselan (Starring Rajinikanth and Pasupathy) and in Hindi as Billu (starring the late Irrfan Khan and Shah Rukh Khan). Shah Rukh Khan Birthday Special: 10 Underrated Performances of the Superstar That Got Late Appreciation or Are Due Some!

Okay, we know that we have not mentioned many more classic characters that the actor has played in many others films. We are sad that we couldn't fit his characters from films like Chitram, Golanthara Varthakal, Bhagyavan, Varaphalam,  Thenmavin Kombath, Traffic, Passenger etc in this list. So if we have missed out on any of your fave Sreenivasan role, do share your opinion in the comments section below.

(The above story first appeared on LatestLY on Apr 06, 2021 09:11 AM IST. For more news and updates on politics, world, sports, entertainment and lifestyle, log on to our website latestly.com).