Due to coronavirus, the entertainment business has been largely getting affected. However, looks like there is still a ray of hope, as Pawan Kalyan-starrer Vakeel Saab is performing immensely well at the ticket window. The courtroom drama has also beaten the record of Master. Read on. 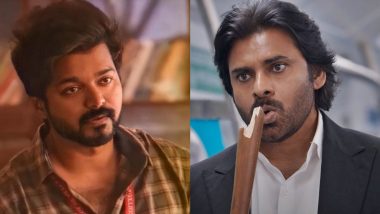 These are testing times, as COVID-19 is still in the air creating mayhem once again. Due to this, even the entertainment business is largely getting affected. However, looks like there is still a ray of hope, as Pawan Kalyan-starrer Vakeel Saab, which released on April 9 in theatres is performing immensely well at the ticket window. The courtroom drama has been tagged as the 'biggest blockbuster' of the year yet. Despite 50 percent occupancy in cinema halls, the movie has set a record with its three-day collection. Vakeel Saab Box Office Collection Day 1: Pawan Kalyan’s Comeback Film Gets a Huge Opening, Mints Rs 42 Crore – Reports.

Now, coming to the winner, Vakeel Saab, it has defeated Master at the box office with Rs 2 crores. As per reports, the movie has minted Rs 71.50 crores in three days. Breaking the total, the flick earned Rs 38 crores on its opening day, Rs 16.50 crores on day two and day three stands at Rs 17 crores respectively. However, to note, there has been no official confirmation with regards to box office numbers yet. Vakeel Saab: The Telugu Teaser Of Alia Bhatt's Gangubai Kathiawadi To Be Attached With Pawan Kalyan's Film (Watch Video).

(The above story first appeared on LatestLY on Apr 13, 2021 11:48 AM IST. For more news and updates on politics, world, sports, entertainment and lifestyle, log on to our website latestly.com).