Ajay Devgn to Step into Idris Elba's Shoes For the Hindi Remake of Luther?

As per new reports, Ajay Devgn is currently in talks with Disney+ Hotstar for a Hindi remake of Idris Elba's popular psychological thriller, Luther. The actor, however, will take a call after the COVID-19 situation in the country normalises. 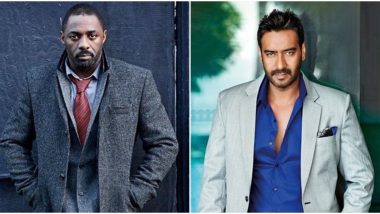 If all goes well, Ajay Devgn may come on board for the Hindi remake of Idris Elba's Luther. Yes, it would be a series like the original and this would also mark Ajay's OTT debut if you don't keep Bhuj: The Pride of India in mind. The actor is currently in talks with Disney+ Hotstar to step into Elba's shoes for the Hindi remake of this popular series that has won many awards in its course time. However, an official announcement on the same may take some time considering Devgn is still busy with his previously announced projects. Ajay Devgn's Bhuj: The Pride of India Will Release Around Independence Day With Janhvi Kapoor's Gunjan Saxena?

Ajay is yet to finish Boney Kapoor's Maidaan and later has the remake of Kaithi in his kitty. Post which he also has Rohit Shetty's Golmaal 5 and Inder Kumar's Thank You. It's only after he finishes his earlier commitments that he can sign his next outing. But keeping in mind the popularity of web space currently, his decision isn't surprising. His next big release has already headed for OTT way and if it gets any good response, the actor won't hesitate in announcing a web series next. Thank God: Ajay Devgn, Rakul Preet Singh, Sidharth Malhotra To Begin Shooting Of The Comedy Drama In September?

Coming to Luther, the series is about a cop who befriends a psychopath and murderer, whom he could not arrest due to lack of evidence, and they solve various cases together. While there are talks about its Hindi remake, the original makers are also contemplating about making a movie based on it. Idris Elba had earlier confirmed a Luther movie being in works and Ajay's involvement in its remake has only piqued our interest further. Here's waiting for an official announcement.

(The above story first appeared on LatestLY on Aug 06, 2020 10:11 AM IST. For more news and updates on politics, world, sports, entertainment and lifestyle, log on to our website latestly.com).