Anand Sagar's Ramayan: Debina Bonnerjee Reveals Why the Initial Days of Shooting Were Very Taxing For Her and Gurmeet Choudhary

While Anand's Sagar's version has also returned to television amidst lockdown and is currently airing on Dangal TV, Gurmeet Choudhary and Debina Bonnerjee have been regaling their fans with some fond memories. 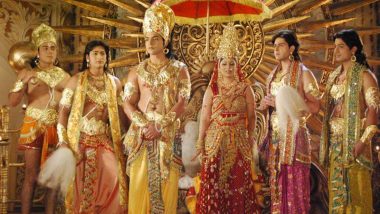 While people are extremely happy to be watching it on air once again, many are also now wanting to know the backstories of how the shooting would take place, and actress Debina Bonnerjee is happy to reveal some secrets from the show's shoot back then!

Debina recently revealed that getting into the costumes of Ram and Sita was initially the most challenging part of the shoot for Gurmeet and herself because it took a whole lot of effort and time to get into the attire of the characters. "I remember how taxing the first few days of the shoot were for Gurmeet and me because getting into our costumes with all the excess makeup and jewellery took really long! Though over time we managed to get ready really fast because we then finally got used to the routine and somehow it increased our speed of getting into our attire as well," revealed Debina. Anand Sagar's Ramayan: Debina Bonnerjee Recalls The Time When She Refused To Shoot Ram and Sita's Wedding Scene With Gurmeet Chaudhary's Body Double (Deets Inside).

She also went on to reveal another interesting tidbit about their Ramayan shoot days and how they both had a bone of contention- their sleep.

"Due to the long hour shoots, we were always low on sleep, so Gurmeet and I would actually fight about who would get into the makeup seat first, so the other could catch up on some sleep in the meanwhile! Though we would just aim at getting ready as quickly as we could, to rest for a while before getting onto set for the day," concluded Debina.

(The above story first appeared on LatestLY on Jun 10, 2020 11:57 PM IST. For more news and updates on politics, world, sports, entertainment and lifestyle, log on to our website latestly.com).