Breaking Bad: Twitterati Share Their Favourite Moments From the Show as it Completes 12 Years Since the Pilot Episode's Release

As the show's first episode completes 12 years since its release, netizens are now celebrating the day by sharing their favourite quotes and scenes on social media. 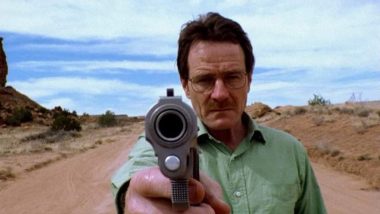 One of the most loved television shows, Breaking Bad released its pilot episode 12 years ago on January 20. Can you imagine, it has been twelve years since we met Walter White? The show was lauded for its amazing storyline, fine performances and direction. One of the biggest rarity in terms of this show is also that it managed to wrap up perfectly. As the show's first episode completes 12 years since its release, netizens are now celebrating the day by sharing their favourite quotes and scenes on social media.

The show gave us some iconic characters like Aaron Paul's Jesse Pinkman, Dean Norris' Hank Schrader and so on. The show also got a spin-off prequel, Better Call Saul thanks to the popularity of Breaking Bad. Users took to social media to write about what they loved most about the show. A Twitter user wrote, "On this day, January 20th 2008 (12 years ago) perfection was born. AMC aired the 1st episode of Breaking Bad. Thank you Vince Gilligan." Check out the Twitter reactions of users relating to Breaking Bad's first episode completing 12 years.

The Art and the Artist!

The Art The Artist

12 years of the best TV show ever #BreakingBad pic.twitter.com/7QKANoozN9

Every breaking bad dialogue is a damn quote !#BreakingBad pic.twitter.com/6cX6AOIvjO

And the Rest is History:

Today, #BreakingBad premiered its pilot episode and the rest is history. #12yearsofBB pic.twitter.com/zkJILSqsde

We bet you agree the show was simply epic and we can't thank the makers enough for coming up with a show like this. Do tell us in comments what's your favourite Breaking Bad episode or moment.

(The above story first appeared on LatestLY on Jan 20, 2020 05:23 PM IST. For more news and updates on politics, world, sports, entertainment and lifestyle, log on to our website latestly.com).