Bullets is a six-episode mini-series, streaming on MX Player. Formerly titled Tina & Lolo, the series stars Sunny Leone and Karishma Tanna in the lead, while Deepak Tijori and Viveck Vaswani are seen in the supporting cast. Sunny's husband Daniel Weber makers a cameo in the series. 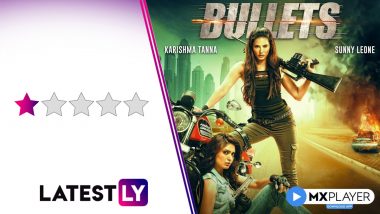 Bullets Review: Bullets is one of the few Hindi series in recent times, like JL50 and Dangerous, that were originally made as movies. However, delayed production and later being dumped to OTT caused the films to be split into different parts and being turned into 'mini-series'. What's more, Bullets, starring Sunny Leone and Karishma Tanna, was not even its original name. Titled after the name of its two lead characters, it was originally called Tina & Lolo. Gone in production way back in 2013, Bullets now makes it to MX Player platform in its newly-edited form but retains all the problems that could have kept it stuck in cans for years. Bigg Boss 14: Sunny Leone to Enter Salman Khan’s Reality Show to Give Reality Dose to Contestants.

Tina (Sunny Leone) is a NRI model who is a concubine for the violent son of a corrupt Home Minister Korade (Viveck Vaswani). Laxmi aka Lolo (Karishma Tanna) is a woman with a mission out to expose Korade's secret dangerous plan. Their paths cross, when Lolo, while trying to steal data from Korade, saves Tina from being strangled by Korade's son, and kills him in defense.

Now on the run, both the women are being chased by the police and also Ketu (Deepak Tijori), a crime-lord faithful to Korade. That, in a nutshell is the premise of Bullets, directed by Devang Dholakia, that comes across as a very Thelma & Louise clone, but with more cleavage to cover the fact that it has nil substance. Or logic. Or actors.

What we get here is a very silly caper with two of the dumbest fugitives ever seen on screen. I mean, the basic rule for any runaway hiding from law and otherwise is to lie low and not catch attention. Here, both the girls are conspicuous in every way, changing into the most glam wardrobes when they get the opportunity  and robbing people left right and centre, while muttering to themselves that they need to stay low. Dangerous Review: Bipasha Basu, Karan Singh Grover’s Thriller Series Is ‘Dangerous’ for Your Senses.

Second law is that to not trust strangers, and they also break that instantly, with Lolo falling for Mario (Taha Shah Badussha, poor guy can't even find his name in the main cast) some guy who she only was acquainted for two days. Tina goes a couple of steps; she instantly falls for a creepy-looking man who immediately proposes marriage to her and asks her to come to meet her mother (who also approves her as a daughter-in-law), all in their first meet. That should have been a cue for them to be on their heels, instead they stay at his house, and even cavorts with him in his pool! Third rule is... well, I could go on and on, but let's not waste more time on something not even the writers thought to bother.

So what else happens here? We have a couple of club songs that are only there to utilise its lead star's sex appeal. One song even goes by the lyrics, "You Dirty Dirty Girl... Zara Humein Bhi De Do Mauka!"

The next line answers that.

We have fake explosions. We have some silly terrorism conspiracy. We have Deepak Tijori obsessively gazing at a female's navel as if he is trying to find the script of the series there. We have a last-minute villain reveal that, if you don't catch it in the first episode itself, then congrats! you are either Tina or Lolo! We also have Sunny's real-life spouse Daniel Weber in a cameo to make out with his wife, because, well, why not!

Sunny Leone's real attempts to speak Hindi is turned into comedy for the series. While Karishma Tanna walks around with a perennially scowled expression, as if she is cursing her non-existent agent for suggesting this project.

The most annoying aspect of Bullets is the ridiculous manner in which the show is edited. The scenes are deliberately arranged in a haphazard manner, so that the screenplay may look intelligent, but all the idea does is basically confuse the hell out of you.

The only agreeable part about Bullets is that it is available for free on MX Player. Otherwise, this forgettable series is not worth your time and patience, even if you are a die-hard Sunny Leone fan. Avoidable!

(The above story first appeared on LatestLY on Jan 08, 2021 03:51 PM IST. For more news and updates on politics, world, sports, entertainment and lifestyle, log on to our website latestly.com).