Directed by Ram Madhvani. Dhamaka is all set to drop on Netflix on November 19. The film stars Kartik Aaryan in the lead role. Read all you need to know about the action-thriller here! 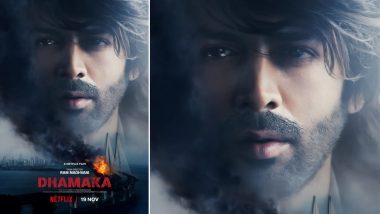 Dhamaka starring Kartik Aaryan in the lead role is all set to release on streaming giant Netflix on November 19. The action-thriller movie is helmed by Ram Madhvani who also produced the film with Amrita Madhvani, under the banner of Ram Madhvani Films, alongside Ronnie Screwvala's RSVP Movies, Global Gate Entertainment, Lotte Cultureworks and Lionsgate Films. After, the flick gets released on Netflix it will be also screened at the 52nd International Film Festival of India. Dhamaka: Did You Know Kartik Aaryan's Film Is an Official Remake of Korean Thriller The Terror Live?

Earlier, the movie was scheduled to release on theatres on January 2021, but somehow the decision was later on changed by the producers, so they decided it for a direct OTT platform release. So, if you are planning to watch Dhamaka on Netflix, here's everything you want to know about the thriller just in case. Dhamaka Trailer: Kartik Aaryan is Explosive as News Anchor Arjun Pathak Dealing With an Intense Terrorism Crisis (Watch Video).

The movie is based on the 2013 movie The Terror Live, the story revolves around Arjun Pathak (Kartik), a news anchor or journalist who gets caught up between TRPs, terror attacks and threatening calls in the city and on air. All these happenings begin after he exclusively interviewed a terrorist, who blew up a bridge.

Dhamaka is arriving on Netflix on November 19. Netflix subscribers can watch the movie exclusively on the streaming giant.

Dhamaka reviews are out. And to read LatestLY's review of Dhamaka click here.

(The above story first appeared on LatestLY on Nov 15, 2021 04:05 PM IST. For more news and updates on politics, world, sports, entertainment and lifestyle, log on to our website latestly.com).