EXCLUSIVE: RJ Anmol Talks About His New Show Jammin, Says Hosting The Show Is His Dream Come True (Deets Inside)

RJ Anmol, has entertained us all from 8 to 10 pm with his Radio Nasha show. In fact, he has also been bestowed upon with the tile of being the 'best radio jockey of India' and why not. He managed to bring back the retro era and invoke feeling of love in us millennials for old songs. 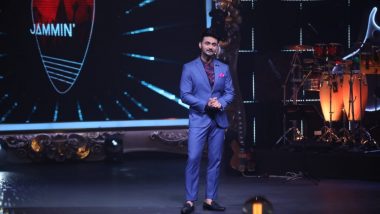 RJ Anmol, has entertained us all from 8 to 10 pm with his Radio Nasha show. In fact, he has also been bestowed upon with the tile of being the 'best radio jockey of India' and why not. He managed to bring back the retro era and invoke feeling of love in us millennials for old songs. In fact, during the course of his radio show, Anmol had also invited yesteryear singers and actors to regale his listeners with their stories. COVID-19 Lockdown: Amrita Rao and Hubby RJ Anmol Name a Fan's Newborn Baby Girl During Their First Live Chat (Watch Video).

And as he makes his hosting TV debut with Jammin on Colors, the RJ recalled his experience with the show so far. "Jammin has been a fulfilling experience. Not just as a host but also as someone who really loves music. I love deep diving into it and discovering its nitty gritties and Jammin is the only show of its kind. I have honestly been very happy just being a fan and watching the shoot on set. Hosting and making a debut with this show was just a cherry on the cake," told Anmol while talking exclusively to LatestLY. Amrita Rao Makes Pregnancy With RJ Anmol Instagram Official, Shares An Adorable Post.

When quizzed about why did he chose Jammin to make his TV debut with, he revealed, "When you are striving for something and looking at fulfilling dreams, you visual it. I always had it in mind that when I host my first show on GEC, it should be a music-based show. Right from my childhood, I have been brought up with music surrounding me at all times. In fact, even in my radio career, music has been my forte. I wanted my TV debut to be music based. It was a dream come true and I was happy when the producers called me."

"I was told they need someone who can talk music, talk to the singers and composers and I was like bingo. The main USP of Jammin is that unlike other shows there are no sob stories, no rona dhona no competition and there is only pure music," says as excited Anmol.

Talking about the response that Jammin has been receiving, Anmol says, "The show is rocking and loving the response on the show. I've received a lot of compliments from the music industry. In fact, the legendary Asha Bhonsleji also complimented me." When asked what is next for him, the RJ and to-be father says, "One thing at a time, nazre aage tikai hui hai to make something bigger and better."

(The above story first appeared on LatestLY on Nov 01, 2020 09:30 PM IST. For more news and updates on politics, world, sports, entertainment and lifestyle, log on to our website latestly.com).