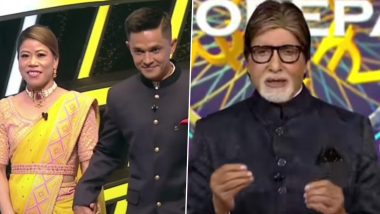 Megastar Amitabh Bachchan is seen introducing India's international football player Sunil Chhetri and eight-time World Champion boxer Mary Kom in the latest promo of the quiz-based reality show Kaun Banega Crorepati 14. "Is desh mein khelne vaale bahut baste hain par kuchh hi hain jinme desh basta hai (There are many people who are into sports in this country, but there are only a very few in whom this country resides)," the Big B says as he welcomes the sports icons. KBC Season 14: Sony TV’s Popular Show Hosted by Amitabh Bachchan To Stream on This Time.

Both Mary Kom and Chhetri are seen sitting on the hot seat and Big B introduces Chhetri saying: "In football, all the dreams of the country are associated with you. This time you bring the Asian Cup for us." Chhetri replies: "Sir I am playing for the country for 17 years. Sir after many days, a time has come when many youngsters are getting mature. There are a number of talented and hungry youngsters and everyone wants to do well for the country." Kaun Banega Crorepati 14 Director Arun Sheshkumar Reveals About Format Changes, Talks About Joys of Working With Amitabh Bachchan.

Later, the host talks about Mary Kom and her achievements. "What to say about MC Mary Kom. She is the only boxer in the world who won eight World Championship medals." Mary Kom says: "Sir it is never easy for a women especially after marriage and becoming a mother to continue playing for the country." Afterwards, Chhetri shows his football tricks and requests Big B to sing a song from his movie.

As the country celebrates 75 years of Independence, the KBC makers have dedicated the inaugural August 7 episode, which will be aired at 9 p.m. on Sunday, a mix of celebrities -- Aamir Khan, Mary Kom and Chhetri -- and lesser-known achievers such as Mithali Madhumita, the first female officer to win a Gallantry Award, and Major D.P. Singh, India's first blade-runner. KBC 14 comes on Sony Entertainment Television.

(The above story first appeared on LatestLY on Aug 07, 2022 10:39 PM IST. For more news and updates on politics, world, sports, entertainment and lifestyle, log on to our website latestly.com).