Money Heist 5: Alvaro Morte Posts 'The Professor Is Back' and We Can't Keep Calm! (View Pic)

The makers have kept the release date of Money Heist 5 under the wraps. 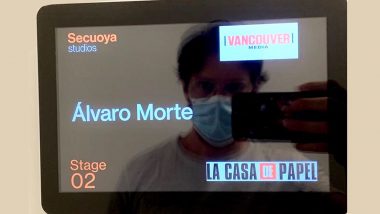 The fourth season of Money Heist aka Spanish series La Casa De Papel broke the internet. The fans were hooked to the new season and the season gained popularity more than the previous ones. Now, as the fans are waiting for the fifth season, here is the brand new announcement straight from the horse's mouth! Alvaro Morte aka Professor posted a picture and wrote 'I'm back.' Álvaro Morte AKA Professor's 'Farewell' Video From The Sets Of Money Heist Will Make Your Heart Skip a Beat!.

The makers have kept the release date of Money Heist 5 under the wraps. Due to COVID-19, the fans also sensed the uncertainty over the arrival of this season. But then here it is! Alvaro posted a picture of his reflection, where he is seen wearing a face mask. In the caption, he wrote, "I’m back. The Professor is back. @netflixes @netflix @vancouvermedia_" Ofcourse, you can imagine the chaos in the comments section after knowing that the actor is back with his most-loved character. Check it out below.

Now is he hinting about the shoot or the date of the arrival of the fifth season, it's yet to be known. Earlier, he had posted a clip from the sets of the series where he was hugging the cast and crew of the series. The fans speculated it to be the last day of the shoot. As far as the new season is concerned, it starts from where it was left in season 4.

(The above story first appeared on LatestLY on Jul 21, 2020 05:38 PM IST. For more news and updates on politics, world, sports, entertainment and lifestyle, log on to our website latestly.com).