Ms Marvel continues to dive deep into its Bollywood and Desi roots, and we are all here for it. However, let’s explore who exactly Waleed is as Farhan Akhtar makes his MCU debut. 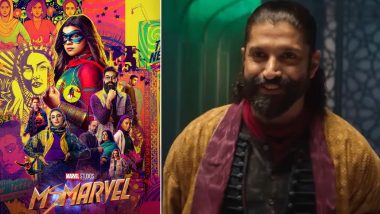 After speculating for a long time as to when Farhan Akhtar was going to make his debut in Ms Marvel, the actor finally appeared in episode four of Iman Vellani’s show. Playing the role of Waleed, the actor had quite the expansive role here. Many thought he would just be a cameo, but he gets to do a lot of stuff in the episode. A warning, spoilers for Ms Marvel episode four will be mentioned in this article. Ms Marvel Episode 4: Iman Vellani As Kamala Khan Meets Farhan Akhtar’s Waleed in This New Clip From Disney+ Series! (Watch Video).

With Farhan Akhtar playing Waleed, this marks the first time a huge Bollywood star has made his debut in a Marvel Studios production. The last time we saw a Bollywood actor in a Marvel project, it was the late Irfan Khan starring in The Amazing Spider-Man, but that was still produced by Sony. Ms Marvel continues to dive deep into its Bollywood and Desi roots, and we are all here for it. However, let’s explore who exactly Waleed is as Farhan Akhtar makes his MCU debut.

Check Out Farhan Akhtar as Waleed:

It's my pleasure to introduce you to Waleed!

Catch me in the latest episode of Ms. Marvel on @DisneyPlusHS.

Who Is Farhan Akhtar’s Waleed?

In episode four of Ms Marvel, we see Kamala Khan travel to Karachi to meet her grandmother who could tell her more about who Aisha was. While trying to uncover secrets in a train station at Karachi, Kamala is met with Kareem, a Red Dagger. Both have a small fight, but then run away in the end to his safe place.

It’s revealed over here that the Red Daggers have been operating for a long time, and we finally meet Farhan Akhtar’s Waleed. While not much is revealed about his character, Waleed tells Kamala that stories of her great-grandmother Aisha are that of the legends. He then continues to tell her about how the Clandestines are from different realms and how their and our world co-exists.

Waleed later gives Kamala the threads of a Red Dagger as well, but they are then ambushed by the Clandestines which leads to a chase around Karachi. During this chase, in an effort to save Kamala and Kareem, Waleed ends up getting stabbed in the back by one of the Clandestines, and is assumed to be dead. Is this the end of Waleed? Well, we don’t really know, but here is hoping that it isn’t.

It's the Craziest Thing Ever!

I looked down to take a sip of my tea but recognized the voice immediately. FARHAN AKHTAR?! FARHAN FREAKIN AKHTAR?!?!?!? My worlds collide more and more with each episode. Wow.#MsMarvel @FarOutAkhtar pic.twitter.com/dF69zlQ6cc

Waleed is a Red Dagger too in this series. For those who don’t know, Red Daggers are vigilantes in the Marvel Cinematic Universe, who well, use Red Daggers as their main weapons in a fight. Over here, their origins have been changed a bit.

In the comics, Kareem is the only Red Dagger and isn’t a part of any group. Him and Kamala share some history together too. Both of them knew each other from their school days, with Kareem even living with Kamala’s grandmother. Looks like the MCU has gone in a different direction.

bruh how do they introduce farhan akhtar’s character and k!ll him off in the same episode like CMON pic.twitter.com/hWNZjS0Yd6

By the end of the episode, he did look pretty dead. But let’s keep some faith as the inclusion of Farhan Akhtar in the MCU was a treat to watch. Very hardly do you get some huge Desi actors show up in big Hollywood productions, and his inclusion definitely elevated this episode. Not to mention, his performance was top notch as always. Ms Marvel Series Review: Iman Vellani’s Disney+ Show is a Sweet, Rebellious Coming-of-Age Drama Wrapped Up in Superheroics! (LatestLY Exclusive).

Seeing as to how important his character is and how much he knows; it would be pretty dumb of Marvel to kill him off in his introduction. We will only get to know when episode five of Ms Marvel premieres next Wednesday exclusively on Disney+ Hotstar.

(The above story first appeared on LatestLY on Jun 29, 2022 02:46 PM IST. For more news and updates on politics, world, sports, entertainment and lifestyle, log on to our website latestly.com).