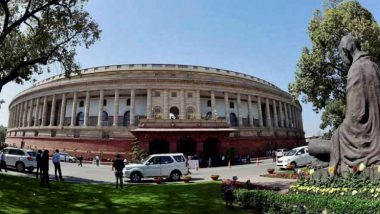 The film industry has come under sharp criticism after the anti-drugs agency arrested Rajput's girlfriend Rhea Chakraborty in connection with investigations into the drug angle in the case. On the first day of the Monsoon session 2020 of the Parliament,actor-politician Ravi Kishan alleged that “drug addiction is there in the film industry too". Monsoon Session 2020: Ravi Kishan Raises Bollywood-Drugs Nexus in Lok Sabha.

The BJP MP praised the NCB for its ongoing probe into the drugs angle linked to Rajput’s death case. Jaya Bachchan criticised Kishan's statement in the Parliament on Tuesday and said that the entire image of the film industry can't be tarnished because of some people. Jaya Bachchan Raises Issue Of 'Conspiracy to Defame Bollywood' In Monsoon Session Of Parliament, Says 'People Who Made Their Name in This Industry Now Call It Gutter'.

"People in the entertainment industry are being flogged by social media. People who made their names in the industry have called it a gutter. I completely disagree and I really disassociate. I hope that the government tells such people not to use this kind of language," Bachchan said in Rajya Sabha.

(The above story first appeared on LatestLY on Sep 16, 2020 09:07 AM IST. For more news and updates on politics, world, sports, entertainment and lifestyle, log on to our website latestly.com).