The corresponding period also led to 2,722 patients recovering from the disease, and 44 infected persons succumbing to the lethal disease. The overall case count reached 3.64 lakh which includes more than 27,000 active cases. 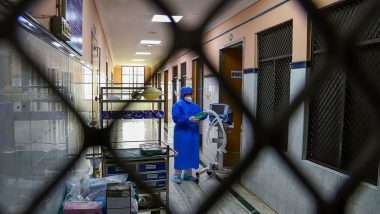 New Delhi, October 27: Even as the COVID-19 curve continues to fall in most parts of India, the surge in infections continue in the national capital. Delhi reported the highest single-day spike since the onset of pandemic on Tuesday. The health department, in its daily update, claimed that 4,853 new infections were recorded in the preceding 24 hours. India Sees Sharp Dip in Daily COVID-19 Cases With 36,470 New Cases Being Reported Today.

The corresponding period also led to 2,722 patients recovering from coronavirus infection, and 44 infected persons succumbing to the lethal disease in Delhi. The overall case count reached to 3.64 lakh which includes more than 27,000 active cases. Possibility of Second Wave Cannot be Ruled Out in Winter, Says NITI Aayog Member.

Even as the numbers raise an alarm in the national capital, the pan-India case-count has been decelerating over the past one month. Earlier today, the Ministry of Health and Family Welfare reported a daily count of 36,470 new cases, which is lowest since the month of July.

The recovery rate in India has peaked to 90.62 percent, the Health Ministry said in its press briefing today. In the days to come, especially amid the ongoing festive season, the government has appealed to the citizens to adhere to the COVID-19 safety norms.

Prime Minister Narendra Modi, in his special address to the nation last week, underlined that the increasing recovery rate should not be interpreted as a signal to lower the guard. The safety measures are required to be followed till a vaccine is developed, he said.

(The above story first appeared on LatestLY on Oct 27, 2020 09:04 PM IST. For more news and updates on politics, world, sports, entertainment and lifestyle, log on to our website latestly.com).