The wildfire in the famed Dzukou Valley located on the border of Manipur and Nagaland continued to rage today. 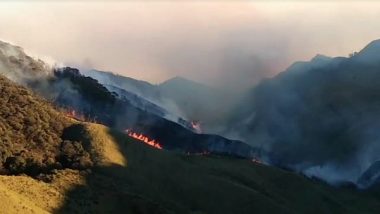 Kohima, January 2: The wildfire in the famed Dzukou Valley located on the border of Manipur and Nagaland continued to rage today. The Centre deployed seven teams of the National Disaster Response Force (NDRF) to help the ground forces in Nagaland contain the Dzukou Valley wildfire that started in Nagaland on December 29 and has since spread to Manipur. N Biren Singh, Chief Minister of Manipur, also informed that 60 NDRF personnel have been deployed.

The Indian Air Force (IAF) has rushed three more helicopters equipped with Bambi bucket to control the raging the Dzukou Valley wildfire, following a request from the Nagaland government. IAF's Mi-17 V5 helicopter was deployed yesterday for the firefighting mission. The Manipur government has also requested the NDRF and the army to help control the wildfire that has spread to its Senapati district. Picture of 'View of California Wildfire Above The Clouds' is Shared With a Fake Claim, Know Truth About This Viral Photo.

The @NDRFHQ has now deployed 60 personnel at the wildfire site at Dzuko valley. Also 2 helicopters equipped with Bambi bucket have been deployed to fight the wildfire. Thanks to Hon'ble HM @AmitShah ji @DrJitendraSingh and all concerned for the swift response. pic.twitter.com/1IHLKaerxG

"The fire has already crossed Mount Iso, the highest peak of Manipur. If the wind direction is going to the southern side, there is a high possibility of entering in the thickest forest called Koziirii in Manipur. Need help," Biren Singh tweeted on Friday, tagging it to the Prime Minister's Office. The Chief Minister later tweeted that he had received a call from Union Home Minister Amit Shah to assess and discuss the situation.

"Amit Shah Ji has assured all the necessary assistance from the Home Ministry to contain the situation at the earliest," he said. The Dzukou Valley, 30 km from Kohima, also is a sanctuary for the endangered Blyth's tragopan - Nagaland's State Bird - and other species of birds and animals.

The iconic valley, situated at an altitude of 2,452 metres above the sea level, is a popular tourist spot and also famous for its seasonal flowers and biodiversity. Often caught in a boundary dispute between Manipur and Nagaland, it also has been prone to wildfires.

(The above story first appeared on LatestLY on Jan 02, 2021 11:05 AM IST. For more news and updates on politics, world, sports, entertainment and lifestyle, log on to our website latestly.com).