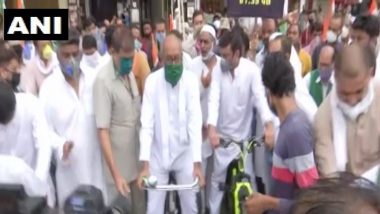 Earlier this month, Singh on Tuesday lodged an FIR against Madhya Pradesh Chief Minister Shivraj Singh Chouhan for "sharing a fake video" of former AICC president Rahul Gandhi during campaigning for the 2019 Lok Sabha polls. This followed after police had registered an FIR against Singh and 11 others for allegedly circulating an "edited" clip of Chouhan's old statement on liquor policy of the previous Kamal Nath government. Diesel Price Surpasses Petrol Rate in New Delhi For First Time Amid Fuel Price Hike, Diesel Being Sold at Rs 79.88 Per Litre, Petrol at Rs 79.76 Per Litre.

Digvijaya Singh & Other Party Workers Take Out a Cycle Protest in Bhopal Against Fuel Price Hike:

Fuel prices in India have reached an all-time high with the recent price hikes over the course of the last few weeks. For the first time ever, diesel is now more expensive than petrol. Over the last 18 days, the price of diesel has been hiked by Rs 10.48 a litre, while the petrol price has increased by Rs 8.50 per litre. As per the official data from Indian Oil Corporation Limited on Thursday, diesel price crossed Rs 80 mark in Delhi, currently at Rs 80.02/litre (increase by Rs 0.14). Petrol price in the national capital, on the other hand, was at Rs 79.92/litre (increase by Rs 0.16).

(The above story first appeared on LatestLY on Jun 25, 2020 08:08 AM IST. For more news and updates on politics, world, sports, entertainment and lifestyle, log on to our website latestly.com).