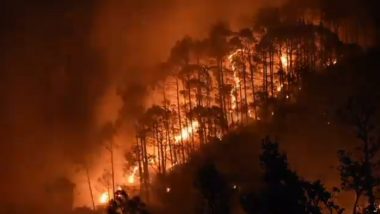 Dehradun, May 26: As the country is yet to recover from the novel coronavirus pandemic, Uttarakhand has been struck by another tragedy. The state has been burning for the past four days. With the rise in mercury, more than 45 forest fire incidents have been reported in the state, affected over 71 hectares of forest lands putting to danger the wildlife species living in forests. Last year, similar wildfires destroyed Hundreds of Hectares of Land in Almora, Nainital, Tehri, Dehradun and Haldwani.

At least 21 instances of forest fires have been reported in the Kumaon region, while the Garhwal region has witnessed 16. The reserve forest area saw nine such incidents of forest fires. According to reports, two people have lost their lives due to wildfires, while one person is injured.

Take a Look at the Massive Forest Fires in Uttarakhand:

Someday, the whole Mother Nature will be no more. Amazon fire, Australian bushfire, and now Uttarakhand's forest fire. Loss of flaura and fauna has been reported.

The fire broke out in Uttarakhand forest. 46 wildfire incidents in 2020. More than half of birds species & wildlife are in danger. Our Uttarakhand is burning for the last 4 days. 2020 is getting worst. 😟#Uttarakhand #UttarakhandForestFire #wildlife pic.twitter.com/HuZZ7z3zyW

How many of you are aware that our Uttarakhand is burning for the last few days?

Please go through the graph below, do not fall prey to misinformation. Forest fires have come down a lot this season. Partly due to less anthropogenic activity and partly due to rains. Go through this news item as well...https://t.co/ozCDqG2Lej pic.twitter.com/yjAp4K0lpe— PIB in Uttarakhand (@PIBDehradun) May 26, 2020

The Press Information Bureau in a tweet advised people to not fall "prey to misinformation". "Forest fires have come down a lot this season. Partly due to less anthropogenic activity and partly due to rains," it said.

(The above story first appeared on LatestLY on May 26, 2020 09:02 PM IST. For more news and updates on politics, world, sports, entertainment and lifestyle, log on to our website latestly.com).