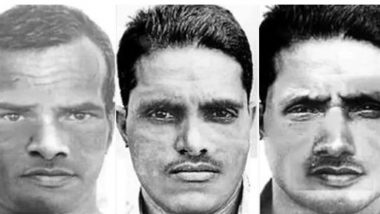 Hapur, August 12: A day after police released three sketches of man accused of raping a six-year-old girl in Uttar Pradesh's Hapur, reports arrived that he has been spotted by local residents with country-made liquor on the outskirts of his native village in Amroha. The accused has been identified as Dalpat who is a resident of Mahmoodpur village in Amroha's Gajraula area.

According to a report, published by Times of India, Dalpat is on the run for six days after allegedly raping a 6-year-old girl in Hapur. Following this, police have formed several teams and are combing the forested areas near Garh in Hapur and Gajraula in Amroha. The police have also released three sketches of the accused based on the description by eyewitnesses. Uttarakhand: Distant Relative, 3 Others Rape 15-Year-Old Girl in Haridwar Hotel, Booked.

Earlier on Thursday, reports arrived that a bike-borne miscreant picked-up minor girl while she was playing outside her house in the Garh Mukhteshwar area. Later, the minor girl was left in a grievous condition in a field. Meanwhile, the condition of the victim is said to be 'extremely critical'. She is undergoing treatment in a Meerut hospital, where doctors have stated that the victim sustained severe injuries in her private parts causing excessive blood loss.

Police said that they have formed five teams to nab the accused and are examining the CCTV footage of the surrounding areas. Police have also announced a reward of Rs 50,000 for any information about him.

(The above story first appeared on LatestLY on Aug 12, 2020 02:38 PM IST. For more news and updates on politics, world, sports, entertainment and lifestyle, log on to our website latestly.com).