To eliminate the swarms of locusts, the Indian Air Force (IAF) has successfully developed an Airborne Locust Control System on Mi-17 helicopters. 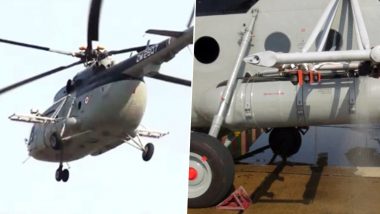 New Delhi, June 30: To eliminate the swarms of locusts, the Indian Air Force (IAF) has successfully developed an Airborne Locust Control System on Mi-17 helicopters. The Airborne Locust Control System can help in spraying pesticides over 750 hectares of land in one mission, said the IAF on Tuesday. Attached to a couple of Mi-17 choppers, the machine will conduct the aerial spray of pesticides. Tiddi Dal Attack in Agra: 60% Locusts Killed by Spraying Insecticides From Drones, Claims Agriculture Department; View Pics.

Drones are already being used for the aerial spray of pesticides to kill the swarms of locusts, the migratory pests entering into the country from Pakistan. Earlier today, Union Agriculture and Farmers Welfare Minister Narendra Singh Tomar flagged off a private chopper, well equipped for the aerial spray of pesticides, from a helipad in Greater Noida to eliminate the swarms of locusts.

The Indian Air Force has successfully designed and developed an Airborne Locust Control System on Mi-17 helicopters for tackling the locust attacks. The machine developed by the Air Force can help in spraying pesticides over 750 hectares of land in one mission: Indian Air Force pic.twitter.com/oxYkdu6PGN

Tomar said that four more helicopters of the IAF will be deployed in the coming days for locust control operations as the required equipment to be fitted to the helicopters for aerial spray have been received. He added that despite several obstacles caused by the COVID-19 pandemic, the Ministry of Civil Aviation has allowed aerial spray of pesticides through drones, helicopters and aircraft. Tiddi Dal Attack: Swarm of Locusts in Rajasthan Divided Into Three Groups, Moved to Delhi, Gurugram and Faridabad.

Last week, three locust swarms were spotted in Delhi and adjoining areas of Haryana and Uttar Pradesh. Locust swarms were seen in South and West Delhi along with Gurugram, Faridabad and Palwal, Rewari and Jhajjar in Haryana. Locusts eat up leaves and the tender tissues of plants, therefore, Kharif crops are under threat. Locust swarm was noticed in Jhunjhunu (Rajasthan) on June 26, and control teams were deployed to eliminate the locusts.

(The above story first appeared on LatestLY on Jun 30, 2020 10:05 PM IST. For more news and updates on politics, world, sports, entertainment and lifestyle, log on to our website latestly.com).