Mathura Jail Mulling To Propose Jail-Themed Restaurant Outside Its Premises

The Mathura Jail is mulling a proposal to have a jail-themed restaurant outside its premises on the lines of the one in Tihar Jail in Delhi. 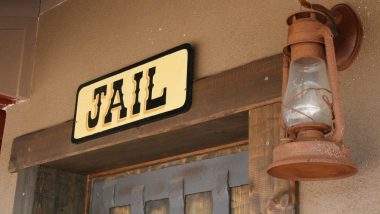 Mathura, October 24: The Mathura Jail is mulling a proposal to have a jail-themed restaurant outside its premises on the lines of the one in Tihar Jail in Delhi. The idea was proposed by the Uttar Pradesh Apradh Nirodhak Samiti, a semi-government organisation, with an aim to provide employment to rehabilitate inmates after their term ends and to let people have a glimpse of the life inside.

The proposal has been sent to the Director General, Prisons, and the Additional Chief Secretary, Home, for approval. If approved, the restaurant will be the first such facility in the state. Chairman of the Samiti, Umesh Sharma said: "People are curious about life inside a jail and many want to taste prison food due to astrological beliefs." Madhya Pradesh: Video Showing Several Youths With Jail Inmate of Gwalior Central Jail Goes Viral; Probe Ordered.

The restaurant will serve food prepared by prisoners. Sharma said: "Once the restaurant is operational, priority will be given to hiring convicts who have served their full term. The profit will be used for rehabilitation of the prisoners and they will also get a salary while working for the restaurant."

The ambience of the restaurant will be in keeping with the jail theme. The entrance will be designed like a prison gate and the interiors will comprise prison cells with dining tables and chairs.

"Handcuffs, waiters in prisoners' uniforms, red lights and other fixtures will be added to give an authentic look of the jail," said Sharma. The project, estimated to cost Rs 25 lakh, will also have a home delivery system.

Sharma said Mathura is the best district to launch such a project as it attracts people from across the world due to its association with Lord Krishna, who was also born in prison.

Jail Superintendent Brijesh Kumar said that they were eagerly awaiting approval for the proposal. He hoped that once this project is approved, it can be introduced at other prisons as well.

Similar initiatives have been taken across jails in the country. Delhi's Tihar has been running such a restaurant since 2014. In a Kerala jail, inexpensive food and bakery items are sold through cafeterias or distributed through mobile vans. The Burail jail in Chandigarh offers a wide range of food items which can also be ordered online.

(The above story first appeared on LatestLY on Oct 24, 2021 11:12 AM IST. For more news and updates on politics, world, sports, entertainment and lifestyle, log on to our website latestly.com).