Navi Mumbai Airport Naming Row: Project Affected People to Protest Outside CIDCO Office on June 24 Over Demand of Naming NMIA After DB Patil; Here's All You Need to Know

The controversy over the naming of Navi Mumbai international airport has intensified as a local group All-Party Action Committee (APAC) has called a protest on June 24. The protestors are demanding that Navi Mumbai International Airport should be named after late DB Patil, a leader of the PAP. The protest is planned outside the CIDCO office on Thursday. 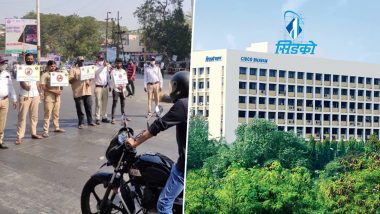 Navi Mumbai, June 23: The controversy over the naming of Navi Mumbai international airport has intensified as Project Affected People (PAP) has called a protest on June 24. The protestors are demanding that Navi Mumbai International Airport should be named after late DB Patil, a leader of the PAP. The protest is planned outside the CIDCO office on Thursday. The PAP is reportedly backed by the Bharatiya Janata Party (BJP) activists.

The PAP has called for gherao of the CIDCO office to pressure the government to name the airport after its leader. Notably, the Maharashtra government and CIDCO had announced to name the greenfield airport after late Bal Thackeray, but local leaders are demanding that it be renamed after late D B Patil, who fought for the rights of Project Affected People.

Meanwhile, permission has not been granted to hold the protest. The PAP claimed that around one lakh people would participate in the protest. Anticipating a law and order situation, section 144 of the criminal procedure code has been imposed for the unlawful assembly of more than five persons. Section 144 will remain in place for 60 days from June 21 till August 19.

The Navi Mumbai Traffic Police has announced a diversion in vehicular movement on Thursday in the wake of the protest. All heavy motor vehicles and light motor vehicles travelling from Mumbai towards Pune will be diverted from Airoli toll plaza via Mahape-Shilphata road to reach Kalamboli. Similarly, vehicles coming from Pune will be diverted from the Purusharth petrol pump at Kalamboli on Sion-Panvel road to Airoli via Taloja MIDC. No vehicle will be allowed in the vicinity of the CBD Belapur in the morning on Thursday.

Notably, the Maharashtra government on Wednesday approved Adani Airport Holdings Ltd (AAHL) to operate the upcoming Navi Mumbai International Airport. The airport is coming up on 1,160 hectares of land in Thane-Raigad region.

Who Was DB Patil?

Dinkar Balu Patil was an Indian politician and Member of Parliament. He was associated the Peasants and Workers Party of India. In 1970s and 80s, he led several protests in Panvel district when CIDCO acquired land. He died in 2021 at the age of 86 years.

(The above story first appeared on LatestLY on Jun 23, 2021 11:47 PM IST. For more news and updates on politics, world, sports, entertainment and lifestyle, log on to our website latestly.com).