In its weather bulletin, the weather agency predicted heavy rainfall in Telangana for Wednesday and Thursday and issued warning for the state. "Widespread rainfall is likely to lash across Telangana and north coastal Andhra Pradesh. 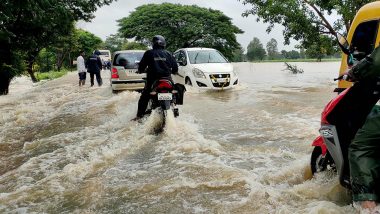 Hyderabad, August 27: Heavy rainfall is expected to lash Telangana and parts of Andhra Pradesh in the next 24 hours, the India Meteorological Department (IMD) said. In its weather bulletin, the weather agency predicted heavy rainfall in Telangana for Wednesday and Thursday and issued an alert for the southern state. "Widespread rainfall is likely to lash across Telangana and north coastal Andhra Pradesh. The forecast is that on August 28-29 heavy rainfall warning has been issued for Telangana", the IMD said. Monsoon 2019: IMD Forecasts 99% Rainfall in August, 100% in September.

The weather agency further informed that some part of coastal Andhra Pradesh is also likely to receive heavy rainfall during the next 48 hours. YK Reddy, scientist, meteorological department, told ANI that the northern part of Telangana is likely to receive heavy rainfall in isolated places. "Light or moderate rain is expected till Wednesday morning in northern Adilabad, eastern Khammam and Warangal district of Telangana", Reddy said.

In Gujarat, the IMD said that isolated places in the state are expected to receive heavy rainfall on Tuesday. The agency has also predicted heavy downpour over East Rajasthan, West Madhya Pradesh, Andaman and Nicobar Islands throughout the day. Meanwhile, heavy to very heavy rainfall likely at isolated places over Uttarakhand, West Rajasthan, Saurashtra, Kutch, Konkan and Goa, coastal and south interior Karnataka and Kerala and Maharashtra in the coming days.

(The above story first appeared on LatestLY on Aug 27, 2019 10:06 AM IST. For more news and updates on politics, world, sports, entertainment and lifestyle, log on to our website latestly.com).