In another shocking incident in Uttar Pradesh, a murder accused was lynched by a mob in broad daylight on Monday. 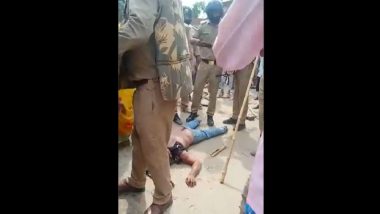 Kushinagar, September 7: In another shocking incident in Uttar Pradesh, a murder accused was lynched by a mob in broad daylight on Monday. The incident took place in Kushinagar's Rampur Bangra village. A video of the lynching is going viral on social media. The deceased, identified as Arman Yadav, allegedly killed a school teacher Sudhir Singh before he was beaten to death by angry villagers. UP Shocker: Woman Beaten To Death By Daughter's Alleged Molesters in Kanpur, Priyanka Gandhi Slams Yogi Adityanath.

Though a number of policemen were present at the spot, the furious mob kept hitting Yadav until he died. According to reports, the deceased had come to Kushinagar from Gorakhpur earlier this morning. Soon after reaching Kushinagar, he allegedly shot and killed Sudhir Singh using his father's gun. It remains unclear why the man killed the school teacher. Soon villagers gathered. UP Shocker: Pilibhit Woman Uses Husband’s Passport to Take Lover on Australia Tour.

The murder accused then climbed up to the terrace to save himself from the mob. He was carrying a pistol. Before police could reach the crime scene, the mob caught hold of Yadav and started beating him. The video showed policemen in riot gear trying to stop the attack but the kept hitting Yadav with sticks even when he stopped moving. The man's head appeared to have been bashed in by the mob.

According to Kushinagar Spuritendent of Police Vinod Mishra, two FIRs have been registered in connection with the two murders and a probe was underway. Heavy police force was deployed in Rampur Bangra village following the incident.

(The above story first appeared on LatestLY on Sep 07, 2020 02:29 PM IST. For more news and updates on politics, world, sports, entertainment and lifestyle, log on to our website latestly.com).