An Akhil Bharat Hindu Mahasabha (ABHM) leader was arrested on Tuesday while allegedly going to recite Hanuman Chalisa at the Shahi Masjid Idgah on the Shri Krishna Janmabhoomi complex. 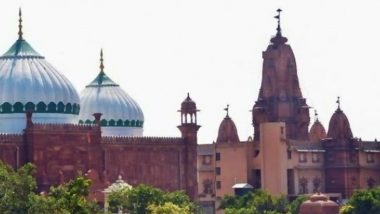 Officials said that seven-eight other leaders of the organisation were also detained in their houses at different police stations of the city. Uttar Pradesh: Security Beefed Up in Sri Krishna Janmabhoomi Complex, Shahi Eidgah Mosque Ahead of ABHM’s Hanuman Chalisa Recital Call In Mathura Today.

The Akhil Bharat Hindu Mahasabha had given a call for reciting Hanuman Chalisa inside the Shahi Masjid Idgah to mark the anniversary of the Babri Mosque demolition.

Additional Superintendent of Police (City) Martandey Singh said the police arrested the Akhil Bharat Hindu Mahasabha's Agra region in-charge Saurabh Sharma, when he was making an attempt to go towards the Idgah mosque on the complex.

He said the Mahasabha's president Rajshri Chaudhary and treasurer Dinesh Sharma were not among those confined at their homes, and that there was no information from the police about the two.

The Babri mosque in Ayodhya was demolished by 'Kar Sevaks on December 6, 1992.

Senior Superintendent of Police (SSP) Shailesh Kumar Pandey said that the law-and-order situation would not be allowed to be disturbed. A strict watch is also being kept on social media, he said. Uttar Pradesh: Warrants Against 16 To Thwart Hanuman Chalisa Call at Shahi Eidgah Mosque in Mathura on December 6.

The orders of the Supreme Court would be followed and the implementation of prohibitory orders under Section 144 of the CrPC in letter and spirit would be ensured, he said.

The organisation had given a similar call last year but their plan was scuttled by the district administration.

(The above story first appeared on LatestLY on Dec 06, 2022 02:59 PM IST. For more news and updates on politics, world, sports, entertainment and lifestyle, log on to our website latestly.com).