Rajinikanth Fans Demonstrate in Chennai, Urge Superstar to Rescind His Decision of Not Entering Politics

The Chennai police has granted permission for the demonstration at Valluvar Kottam. Cadres of the actor's political party, Rajini Makkal Mandram (RMM), joined in large numbers despite the call issued by RMM leadership to not to exert pressure on Rajinikanth. 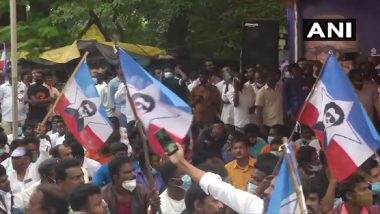 Chennai, January 10: A demonstration was held in the Tamil Nadu capital on Sunday by fans of Rajinikanth, as they demanded the actor to rescind his decision of not entering into politics. Scores of demonstrators, who identified themselves as diehard fans of the southern superstar, said their demonstration is aimed at persuading him to change his decision. Rajinikanth To Not Launch Political Party, Superstar Cites Health Condition Behind This Big Decision.

The Chennai police has granted permission for the demonstration at Valluvar Kottam. Cadres of the Rajini Makkal Mandram (RMM) joined in large numbers despite the call issued by RMM leadership to not to exert pressure on Rajinikanth.

Tamil Nadu: Members of Rajinikanth's fan club stage demonstration at Valluvar Kottam in Chennai to request the actor to take back his decision not to enter politics. pic.twitter.com/sMfXGpNOkt

Rajinikanth had, on December 29, announced his decision to not to enter politics. This came barely a couple of weeks after he had claimed his party would contest from all 234 assembly constituencies in the state.

The decision to back down was preceded by the deterioration in is health. The 70-year-old was hospitalised after he facing blood press-related issues. After he was released, a statement was issued on his social media accounts, stating that Rajinikanth's fragile health would not allow him to enter active politics.

"I inform with great regret I am unable to come to politics by floating a political party. Only I know the pain behind making this announcement," he added.

(The above story first appeared on LatestLY on Jan 10, 2021 03:16 PM IST. For more news and updates on politics, world, sports, entertainment and lifestyle, log on to our website latestly.com).