When Is Father’s Day 2020? Know Date, Significance, History and Celebrations of the Day That Celebrates Fathers and Their Contribution to Family and Society 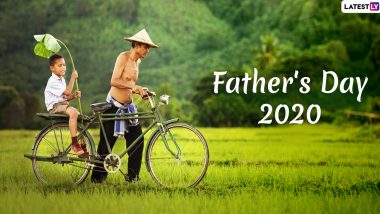 Father's Day was founded by of American Civil War veteran William Jackson Smart Sonora Smart Dodd. The United States celebrated the first Father’s Day on June 19, 1910, in the state of Washington. However, it was only until 1972, around 58 years after President Woodrow Wilson made Mother’s Day official, that the day for fathers came to be recognised. Father's Day Gift Ideas: Cool, Personalised and Absolutely The Best Gifts That Will Make Your Dad Feel Special and Loved!

There are various theories and stories of how Father's Day came into being. The most believed one is that a woman named Grace Golden Clayton from Fairmount, West Virginia, who was an orphan urged the local Methodist ministers for a church service to honour fathers in 1908. It happened following a mining disaster in which about 362 local men were killed. The mass death impacted her due to which she wanted to celebrate fathers. Hence, she urged the church to conduct a service for fathers.

Another story states that Sanora Smart Dodd is the brain behind this day. She and her five siblings were brought up by his father after their mother died in childbirth. Her father neither remarried nor placed his children under the care of others but took care of them all by himself. She hence wanted to show gratitude to her father, William Jackson Smart-a civil war veteran. After hearing a sermon by Anna Jarvis whose initiative gave birth to Mother's Day at Central Methodist Episcopal Church, Sanora approached her pastor and proposed a day for honouring fathers. Dodd proposed to have Father's Day observed in June, which happened to be his father's birthday month.

In 1913, Congress received a bill to recognise Father's Day, however, in 1916, they rejected it fearing that it would become yet another commercialised holiday. Later on in 1966 when many men left their families to fight in World War II, the role of fathers' contribution surface again. Following which President Lyndon B Johnson issued a proclamation designating Father's Day USA to be observed on the third Sunday in June. In 1972, President Richard Nixon signed it into law as a permanent national holiday.

Today, on Father's Day people try to spend more time with their fathers. They buy them gifts and take them out for shopping. People also give them flowers and cards greeting them on Father's Day. While you may not be able to celebrate the day this year due to lockdown, however, you can still set the day apart for them. We wish all fathers out there Happy Father's Day in advance!

(The above story first appeared on LatestLY on Jun 05, 2020 10:52 PM IST. For more news and updates on politics, world, sports, entertainment and lifestyle, log on to our website latestly.com).