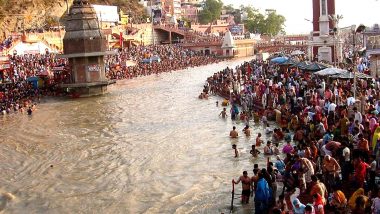 Ganga Saptami or Ganga Jayanti is one of the most auspicious days in the Hindu calendar. Dedicated to Goddess Ganga, the day is also known as Ganga Pujan and Ganga Jayanti as Ganga is believed to have reborn on this day. On Ganga Saptami, devotees worship Goddess Ganga and take bath in the Holy Ganges. Taking bath in River Ganges on this day is considered highly auspicious. The sacred water is believed to clean one from all their sins. River Ganga is believed to have been bord on Saptma of Shukla Paksha of the Hindu month of Vaishaka. Ganga Saptami 2020 falls on April 30, Thursday. Ganga River Flows Clear as Crystal at Rishikesh! Watch Viral Video of Clean Running Water Near Lakshman Jhula.

According to Hindu Mythology, Ganga descended to Earth on Ganga Dussehra day. When Ganga descended to the Earth, Lord Shiva took her in his hair to break Ganga sweeping away the whole Earth. Later, Lord Shiva released River Ganga to that she can fulfil her mission to kill Bhahiratha's ancestors. On her way, the mighty waters of Ganga destroyed the Ashram of sage Jahnu. An angered Sage Jahnu drank up all the waters of Ganga. Bhagiratha and other Gods then prayed to Rishu Jahnu to release Ganga so that she could fulfil her mission. Pleased by the prayers, Jahnu released the waters of River Ganga. According to mythology, he let go off the waters on Saptami of Vaishakha Shukla Paksha. Because of this legend, this day is also known as Jahnu Saptami. Ganga is also known as Jahnavi, the daughter of Rishi Jahnu.

While a large number of people come together to celebrate Ganga Saptami every year, this year the customs won't be held due to coronavirus lockdown. As people are supposed to follow social distancing, devotees are not expected at the ghats of the Ganges for the holy bath.

(The above story first appeared on LatestLY on Apr 29, 2020 09:00 AM IST. For more news and updates on politics, world, sports, entertainment and lifestyle, log on to our website latestly.com).