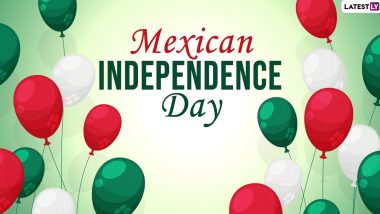 Mexican Independence Day is celebrated every year on September 16. But this day is often confused with another observance called Cinco De Mayo, which takes place on May 5 each year. The Mexican War of Independence was an armed conflict and political process, lasting from 1808 to 1821, resulting in Mexico's independence from Spain. The day on which the war began, also called the Cry of Dolores is marked as the official day of Independence of Mexico. On September 16, 1810,Roman Catholic priest Miguel Hidalgo y Costilla rang his church bell and gave the call to arms that triggered the Mexican War of Independence. On this Mexican Independence Day 2020, we tell you why it often gets confused with Cinco De Mayo and how are they different.

Cinco De Mayo is observed on May 5th, and it commemorates the Battle of Puebla (May 5, 1862). In this battle, the Mexican forces defeated the French intervention forces of Napoleon III, forcing them to retreat. This win is celebrated years later as a day of honouring Mexican culture. Many Americans mark it as a day to observe the Mexican spirits expecially in US. Cinco De Mayo has grown popular as a holiday tradition to indulge in some beer and tequila. Many restaurants have special discounts for beer and traditional Mexican food this time around. So it is more of a fun celebration in US than in Mexico. Cinco de Mayo 2020: 11 Interesting Facts From Puebla Dress to Mole Poblano That Makes This Celebration Day Even More Amazing!

The Mexican Independence Day commemorates the day of the struggle against the Spanish. After the Cry of Dolores, Miguel Hidalgo y Costilla is now considered the father of Mexican independence. His uprising on 16 September 1810 is considered the spark igniting the Mexican War of Independence. He demonstrated the massive discontent, from a small gathering at a church to a massive revolt, the Spanish regime was not prepared for the violence of the movement.

So while one is about a conflict again French intervention, the independence day war was against the Spanish forces. Cinco De Mayo is more of a holiday celebration, while the Independence Day is reminder of the conflict of independence that began on September 16. It is marked with Parade as an annual tradition. There are a variety of events that show the Mexican pride and unity. This time all of it was cancelled due to the pandemic and people will have virtual celebrations instead.

(The above story first appeared on LatestLY on Sep 16, 2020 09:00 AM IST. For more news and updates on politics, world, sports, entertainment and lifestyle, log on to our website latestly.com).