National apple pie day is observed annually on May 13 in the United States. Apple pie is also one of the most favorite desserts for Americans. However, apple pie wasn't actually invented in the U.S, but it is now certainly associated with many American cultures and traditions. 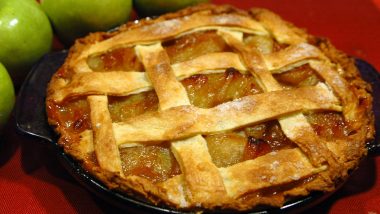 National Apple Pie Day is observed annually on May 13 in the United States. Apple pie is also one of the most favourite desserts for Americans. However, apple pie wasn't actually invented in the U.S, but it is now certainly associated with many American cultures and traditions. It was invented in Europe during the 14th century. The first apple pie recipe was printed by Geoffrey Chaucer in 1381 in England. Apple pie tastes best when served with ice cream. It is also served with whipped cream. It is served hot or cold Choice is yours. On the occasion of National Apple Pie Day 2021, we will share with you an apple pie recipe with the best fillings and flaky crust. From Caramel Cream Pie to Peanut Butter Pie, Here Are 5 Recipes to Try at Home.

History reveals that apple pie seems to have been very popular in centuries past in countries like England and The Netherlands. Both of these countries have recipes going back many centuries. In fact, the history of apple pie dates back more than 600 years, to the 14th century with an English recipe. At that time, in the 1900s, Apple Pie was seen by many people as a healthier option to certain other pies. The ingredients in the recipe included apples, spices, raisins, figs, pears, and saffron which was all enveloped in a pastry crust. Apple Pie Day can bring together all of these various culinary traditions and allow people all over the world to enjoy the humble yet delicious apple joy in all its glory. Now let us take a look at the apple pie recipe with the best filling & flaky crust.

Apple Pie Day is all about trying recipes and getting active in the kitchen. Even for people who don’t necessarily bake desserts very often, Apple Pie Day offers up a chance to change that. But, hey, just because a person may not feel like baking a pie, this does not exclude them from enjoying the day. Many other options exist for having fun with apple pie by eating it and sharing it with loved ones.

(The above story first appeared on LatestLY on May 13, 2021 12:50 PM IST. For more news and updates on politics, world, sports, entertainment and lifestyle, log on to our website latestly.com).