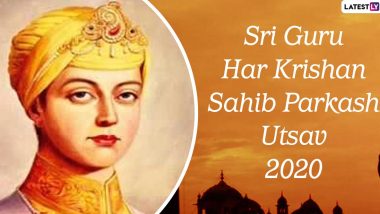 Parkash Utsav of the eighth Guru of Sikhs Sri Guru Har Krishan Sahib falls on July 14 this year. According to the religious calendar, he was born on Sawan Vadi 10, Bikrami Samvat 1713 at Kiratpur Sahib. He was the eighth of the ten Gurus of Sikhism. He became Guru on October 20, 1661, at the age of five following the footsteps of his father, Guru Har Rai Ji. Today, marks his 364th Jayanti. Before Guru Ji died, he nominated Baba Bakala Ji, as the next Guru of the Sikhs who was his grand-uncle Guru Tegh Bahadur. As we observe Prakash Utsav Sri Guru Harkrishan Sahib, we bring to you some facts about his life. People wish each other saying Happy Gurupurab on the observance.

His resting site was the same place he had camped to look after the sick and suffering poverty-stricken people of Delhi. Among the Muslim community of the region, he was known as as 'Bala Pir' and by the Hindus as 'Balmukand'. In their prayer (ardas) written by Guru Gobind Singh, the Sikhs repeat every day these words, "Contemplate on Guru Harkrishan, the vision of whose divine personality dispels all sorrow and suffering."

(The above story first appeared on LatestLY on Jul 14, 2020 09:00 AM IST. For more news and updates on politics, world, sports, entertainment and lifestyle, log on to our website latestly.com).