Animals Frozen in Kazakhstan in -51 Degrees Temperature is Fake? Viral Video Doing The Rounds Online Raises Doubts Whether it is Staged

A video of animals frozen due to the severe conditions has been shared online. The video shows not one but several animals frozen on the spot, and when someone comes around and pushes them, they drop dead. However, the authenticity of the video is being questioned online, some say that it looks staged. 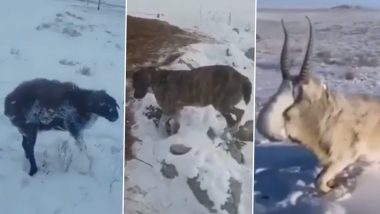 The climate across the world is seeing extreme changes. The dangerous effects of global warming, resulting in extreme weather conditions in the longer run are always talked about. In Kazakhstan, the temperatures in winter drop to -50 degrees and the conditions are inhabitable. A video of animals frozen due to the similar conditions has been shared online. The video shows not one but several animals frozen on the spot, and when someone comes around and pushes them, they drop dead. However, the authenticity of the video is being questioned online, some say that it looks staged. But whether it is real or not, the video raises concerns about the situation of animals and also climate change in general. Freezing Temperature! Twitter User Shares Pic of Noodles and Eggs Frozen in the Air Because of Chilled Weather at Siberia.

Animals freezing in cold is not unthinkable. It was recorded back in 2018. Similar video of frozen hare and dog frozen in extreme cold had gone viral back then. The 'recent' video has been shared by multiple users on Twitter, including IPS Officer Rupin Sharma. As per the video, it was about -51⁰ C at time. The video shows a user filming in an area covered with heavy snow. It has animals like Saiga Antelope, Steppe Wolf, two dogs (one of them has a mouse over it), all of them frozen in a standing position. It appears as if they instantly froze while in motion. The man filming the video is also seen kicking one of the animals, who then drops down. The video is going viral online by also raises doubt on its authenticity. It looks like someone made to stand these animals in close distance and made the video. Man Rescues a Family of Deer While Skating on a Frozen Lake in Canada, Wins Hearts Online After Video Goes Viral.

Report of #Kazakhstan 🇰🇿 - due to severe dip in temperature -51⁰ animals are getting frozen. 😱

The video sure looks scary, if at all that's the situation. IFS officer commented that it looks very unreal. Check how some others dismissed it to be fake:

An animal would seek shelter in the cold. It would be curled up close to the ground near some cover trying to keep warm as it died.

If true, these animals would have been found dead hiding under some kind of cover.

Nope, they would never be frozen standing up, never mind in motion.

If you freeze to death, you go to sleep before you die of hypothermia.

(I'm from 500 miles north of the North Dakota border & have been outside in temperatures of -50C... obviously dressed properly...)

Why all animals are standing in poses ?? Looks like this is not true !

Here's The Video From 2018 in Kazakhstan:

(The above story first appeared on LatestLY on Jan 22, 2021 02:03 PM IST. For more news and updates on politics, world, sports, entertainment and lifestyle, log on to our website latestly.com).