Apple officially released iOS 14.2 and iPadOS 14.2, bringing a variety of new features that users are sure to love. In this article, we will bring you the updated iPhone emojis with iOS 14.2 and how users are in love with the colourful world of texting. 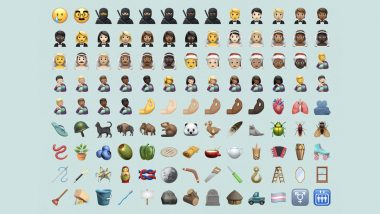 Apple officially released iOS 14.2 and iPadOS 14.2, bringing a variety of new features that users are sure to love. The latest version brings a host of notable changes and new features, but the most important thing for netizens would be the dozens of new emoji that are now available to use. With the latest version, you get over 100 new emojis to have fun and better express yourself. Users are more excited about the emojis that include gay women wearing suits, gay men wearing wedding dresses, trans pride flag, smiling face with tear and more; people are already obsessed with the latest update. There is no doubt that the latest update got huge shout-outs from users. In this article, we will bring you the updated iPhone emojis with iOS 14.2 and how users are in love with the colourful world of texting.

Emojis have a lot of influence among users, and all of it has different meanings altogether. When someone does not want to type, just one emoji could make expressing feelings so much easier. With iOS 14.2 launching over 100 emojis, it was obvious for netizens to fall in love with it, especially when it has some cute little additions no one would have hoped for but wanted. The latest emojis include a ninja, transgender pride flag, a coin, bubble tea, men wearing dresses, women wearing suits, and so much more you can’t miss. Let us check out how netizens are reacting to the latest update of Apple’s iOS 14.2 and which emojis are getting more thumbs up.

Which one is your favorite? pic.twitter.com/W0svNqKEpy

This is the Best!

IOS 14.2 REALLY DID THAT!! I PEEPED THIS IN THE PICTURE!! THE TRANS COMMUNITY FINALLY HAS A TRANS FLAG EMOJI 🥺 IM SO HAPPY FOR Y’ALL!!! RT TO ALL YOUR FRIENDS 💙💖🤍 pic.twitter.com/wpnWZd4fGq

ios 14.2 came out, and i will be using these 2 emojis very much now LMAO pic.twitter.com/a52wVpy1jC

WHY IS NO ONE TALKING ABOUT THE LIL BEBE SEAL IN IOS 14.2 LOOK HOW ADORABLE IT ISSSSSS😭😭😭 pic.twitter.com/sI2YYrGSgg

This is So Cool

THE NEW IOS 14.2 EMOJIS HAVE THE TRANS FLAG, WOMEN IN SUITS, AND MEN IN VEILS THIS IS NOT A DRILL pic.twitter.com/mYnseDXl2W

These new emojis included in iOS 14.2 tho 🥺🥺🥺 pic.twitter.com/fF7QCReR9y

Aren’t they so cool? Not only emojis, but the new update also brings other improvements to iOS 14.2, including eight new wallpapers, a refreshed AirPlay menu, a new Shazam toggle for Control Centre and the usual array of bug fixes. We must say, Apple’s latest iOS 14.2 is super impressive!

(The above story first appeared on LatestLY on Nov 06, 2020 10:03 AM IST. For more news and updates on politics, world, sports, entertainment and lifestyle, log on to our website latestly.com).