Cardi B is set to launch her first-ever Reebok collab, and she graced the cover of Footwear News by paying homage to Hindu Goddess Durga, a warrior woman with eight hands, while holding a bright red pair of sneakers. But it hurt the religious sentiments of Indians. 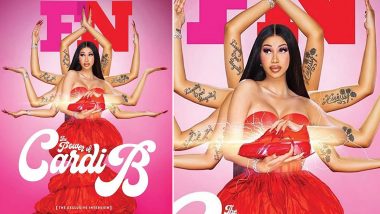 American rapper Cardi B is never out of controversy. When she is not ruling the world with her stirring song lyrics or loud and bold fashion, the 28-year-old is seen landing herself on controversies that garners enough attention. She did something which was supposed to be powerful but instead hurt the religious sentiments of the Hindus in India. Cardi B is set to launch her first-ever Reebok collab, and she graced the cover of Footwear News by paying homage to Hindu Goddess Durga, a warrior woman with eight hands, while holding a bright red pair of sneakers. However, Cardi’s corseted gown revealed her cleavage, and it hurt many people in the country. Indians are not impressed by Cardi’s bare-bodied homage to the goddess, and they now slam the American rapper on Twitter claiming the cover is extremely ‘disrespectful.’

In a glamorous shot of the Grammy winner, she manoeuvred her arms into eight different positions. From stretched out on her sides to crossed over her head, Cardi embodied Goddess Durga, who is the symbol of strength and protection in a gorgeous red Georges Hoebika gown to promote her red sneaker. Footwear News’ Instagram handle shared the image of Cardi captioning, “In a @GeorgesHobeika dress, she pays homage to Durga, the Hindu goddess, whose symbols of protection and inner strength resonate as much in modern times as they have through the centuries. Like Durga, Cardi B is a dominant female voice at a critical time.⁠” The American rapper also shared the cover pic on her Instagram handle to promote the sneaker collection.

If Cardi’s rockin’ it, go buy stock in it. That’s a tip as FN’s November cover star @iamcardib makes her first major foray into the shoe industry with the Nov. 13 debut of her Club C Cardi sneaker collection with @Reebok.⁠ ⁠ In a @GeorgesHobeika dress, she pays homage to Durga, the Hindu goddess, whose symbols of protection and inner strength resonate as much in modern times as they have through the centuries. Like Durga, Cardi B is a dominant female voice at a critical time.⁠ ⁠ At the link in bio, Cardi B gets candid with FN’s @nikarajohns about her future in the fashion industry, upcoming Reebok collab and her relentless need to win in the FN exclusive.⁠ ⁠ --⁠ Photography: @jorafrantzis; Style Director: @shannonadducci ; Styling: @kollincarter; Style assistant: @jennijenu; Tailor: @sirbabajagne; Makeup: @erika_lapearl_mua; Hair: @tokyostylez; Nails: @marienailz; Set Design: Brielle Hubert, Pete Hickok and Yalina Flores⁠

There is no doubt that Cardi is in charge and her meticulous attention to detail is always evident as she focuses her gaze directly on the monitor after each click. But when it comes to embodying a religious figure, it appears that she should have paid a little more attention to the detail. At least that is what the Indians say on social media with tweets flooded on different platforms displaying how unimpressed they are with Cardi’s latest cover picture.

Desi Twitterati is Not Impressed!

So some people are saying Cardi B is paying homeage to our hindu goddess Durga.

As a hindu, I want to say that, durga maa is never depicted bare bodied.

Secondly it is prohibited to wear shoes in a temple and this woman is holding a shoe on her hand depicting goddess Durga? pic.twitter.com/Dr45M4azmO

They Call it Disrespectful!

as far as I know, we don't wear shoes anywhere around holy places be it of any culture in India. we always walk in bare footed in holy places and Cardi B is holding a damn show in her hand making it more disrespectful?!?!

And you all turn a blind eye when it's about India?

As a Hindu I want to say that

Firstly wearing a shoe near Durga maa is prohibited. Secondly Durga maa is not to be used as an aesthetic. Cardi ain't paying homage to her. She's disrespecting her. Know the difference pic.twitter.com/zfyTn7UEvx

cardi this is disrespectful, you don't hold shoes and pay 'homeage' to Durga Maa like that, shoes aren't allowed in temples pic.twitter.com/uRINftS4wm

Cardi is yet to comment on the various responses she got about the cover photo for her first-ever Reebok collab. Meanwhile, Cardi B x Reebok collection comes in the brand’s iconic Club C style, as well as her own take on the silhouette, which is labelled as the Cardi Coated Club C Double. You can preview the collection now, but it will be available in the market from November 13, 2020. There are three colours to choose from—bright patent red, off white with a brown sole, or black with a brown sole.

(The above story first appeared on LatestLY on Nov 11, 2020 01:18 PM IST. For more news and updates on politics, world, sports, entertainment and lifestyle, log on to our website latestly.com).