The Hanuman Chalisa however, uncovers the big secret of science. A scientific revelation has been observed in this mythological prayer. 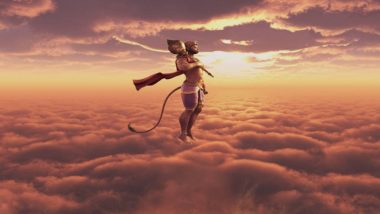 As per the calculations of the modern scientists, the distance between the Sun and Earth is 147 million kms. This is at the nearest point in the earth's orbit called the Perihelion. The longest distance between the two called Apoapsis is 152 million kms. This was measured first time in the 16th century by Jean Richer and Giovanni Domenico Cassini. But it is interesting to note that Tulsidasji was able to give out the calculation in about two lines of Hanuman Chalisa. Hanuman Chalisa During Brain Surgery! Man Recites Religious Hymn While Being Operated for Tumour.

A mythological tale says that Hanuman in his childhood assumed the Sun to be a fruit of mango. He was hungry and jumped to eat it. Tulasidasa writes, "yuga-sahasra-yojana para bhanu leelyo tahi madhura phala janu". The line means, "Sun is at the distance of sahastra (thousand) yojan (unit of distance)

Here is how the conversion practices were used in the Vedic literature,

Thus, it is said that Hanuman Chalisa accurately provides the distance between the Sun and the Earth. It is thus astonishing that almost 2 centuries before the modern scientists, Tulsidas predicted the distance.

(The above story first appeared on LatestLY on Apr 16, 2019 01:06 PM IST. For more news and updates on politics, world, sports, entertainment and lifestyle, log on to our website latestly.com).