TWICE's Momo and Sana went on impressing ARMY and ONCE after they groove to the tune of BTS’ hit song, ‘Dynamite.’ Their super cool moves are going viral on the internet, giving major BFF goals. 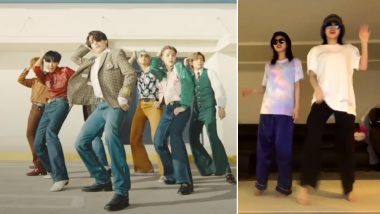 The South Korean artists always manage to trend on social media and enjoy massive fan followers across the globe. Now, Sana Minatozaki and Momo Hirai—members of K-Pop girl group TWICE is trending on Twitter after videos from their late-night VLive session went viral. We all know how Momo is an ace dancer, but Sana managed to match the rhythm too. Not only Once, but both Momo and Sana also went on impressing ARMY after they groove to the tune of BTS’ hit song, ‘Dynamite.’ Their super cool moves are going viral on the internet, giving major BFF goals. In this article, we bring you videos of the K-Pop girls from their late-night VLive session with fans—dancing, doing each other’s makeup and being all goofy.

Twice is a South Korean girl group, debuted in 2015. The nine members group include Nayeon, Jeongyeon, Sana, Jihyo, Mina, Dahyun, Chaeyoung, Tzuyu, and Momo. Their fandom is called ONCE. Each member brings some unique qualities to the group and are loved by fans. While Sana’s style game is lit, Momo has got some excellent dancing skills, which is why she is the main dancer of TWICE.

The two idol group members streamed live at 3:00 AM KST on VLive—a South Korean live video streaming service that allows celebrities based in the country to broadcast live videos and chat sessions with fans. The two idol group members spent time communicating with fans and enjoying each other’s company as they did various activities, like dancing to Psy’s ‘Gangnam Style,’ and more. But what impressed fans more is their tuning to the accurate dance moves to BTS song, ‘Dynamite.’ ARMY is so impressed!

Just want to show you how sync momo is with bts ESPECIALLY THE JIMIN PART OMG pic.twitter.com/NHgRVLcmj8

this is one of my favourites tonight tho.. and momo omg 😭 and sana 😭😭pic.twitter.com/Z2TJtFn8HN

not momo and sana dancing to gangnam style at 4 am 😂😂 pic.twitter.com/YI3f7SkHbp

Fans across the world are in love with this duo. They sure had too much fun late at night, and the pair gave major BFF goals. Momo and Sana continued their VLive session for over two hours, and even enjoyed doing morning yoga at 5:00 AM KST.

(The above story first appeared on LatestLY on Jan 16, 2021 12:35 PM IST. For more news and updates on politics, world, sports, entertainment and lifestyle, log on to our website latestly.com).