The trailers of Joker and Kalank both released yesterday and the reactions they received on social media need your attention now! 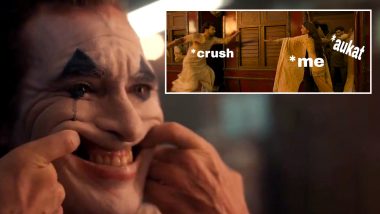 Kalank and Joker's trailers released yesterday and here's how internet reacted to them. (Photo Credits: Twitter)

Two big trailers from completely distinct genres released yesterday. One was the much-anticipated Bollywood drama Kalank whereas the other much darker and probably DC's much-awaited Joker. There's nothing common between the two films but both set the internet on a crazy ride with their trailers. The Bollywood drama stars some big names such as Alia Bhatt, Varun Dhawan, Aditya Roy Kapur, Sanjay Dutt, Sonakshi Sinha and Madhuri Dixit Nene. Joker, on the other hand, has the phenomenally talented Joaquin Phoenix in lead and a supporting cast boasting of veteran actors such as Robert De Niro. The Batman spin-off revolves around the story of the superhero's archenemy and takes a peek at the story of the man behind the maniacal villain.

Both the set of trailers received their own set of positive reactions from the fans but it was evident that the Hollywood release found much more love even from netizens than the Hindi film Kalank. The Karan Johar production set in 1945 may have magnificent sets and colourful costumes but it hardly stood competition to the Todd Philips directorial. Joker Teaser Trailer: Joaquin Phoenix Takes Us Through Arthur Fleck's Chilling Journey From a Stand-up Comedian to The Clown Prince of Gotham.

Kalank started off what one could call a 'meme fest' whereas Joker has been receiving love letters from netizens for Phoenix's amazing act and fans even believe that he's definitely making the late Heath Ledger proud. Kalank Trailer Review: Varun Dhawan and Alia Bhatt's Love Story Prevails Against The Horrors of the Partition Saga - Watch Video.

Here are some of the memes that hit the internet after Kalank trailer release:

Another meme on Kalank dialogue:

*After sacrificing all their comfort for their family*

A meme posted by a user on the Kalank trailer climax:

The popular scene from Kalank trailer that has been the most popular choice for memes:

Of course, there are several Bollywood lovers who liked the Kalank trailer and had many nice things to say about it, especially Alia Bhatt and Varun Dhawan's chemistry.  Now, take a look at the Joker comments and you will know who's the winner!

A user after watching Joker trailer:

That #Jokertrailer made me cry. DC, you’ve officially gotten my attention with this one.

The #Jokertrailer may be one of the best trailers I’ve seen in awhile, easily became one of my most hyped movies of 2019

It seemed like netizens had a field day talking about two films which are big in their own ways. While Kalank is all set to release on April 17 luckily it won't be facing any competition from Joker at the box office. Joker is slated to hit the screens on October 4.

(The above story first appeared on LatestLY on Apr 04, 2019 04:53 PM IST. For more news and updates on politics, world, sports, entertainment and lifestyle, log on to our website latestly.com).