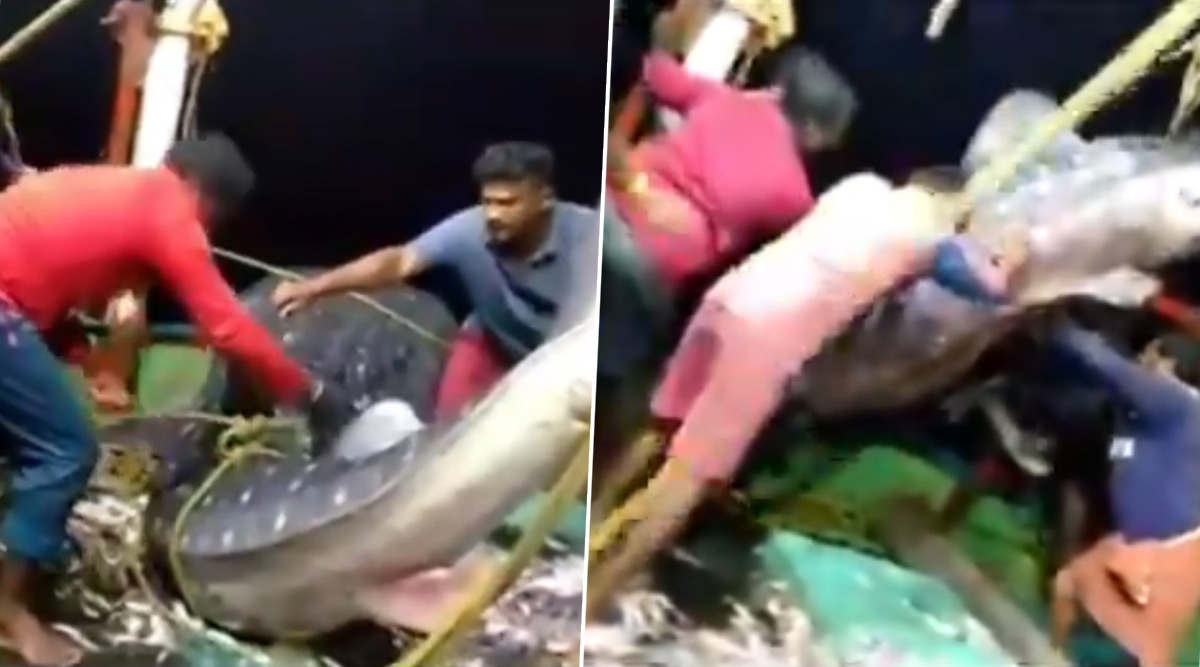 The fishermen community thrives on their catch but often they make an unexpected catch in their net. A group of fishermen from Kozhikode, Kerala caught a whale shark in their net. But understanding that this fish is best released back in the sea, the fishermen ensured they release it back. A video of the group of fishermen releasing the massive whale shark into the sea has come up online. The actions of these fishermen deserve to go viral. The video was shared on Twitter and a lot of people are sharing it, hailing the fishermen for their actions. Endangered Whale Shark, the Largest Fish on Earth, Spotted off Florida Coast; Check Pics and Videos.

It is not exactly known when the incident take place, but the video was first shared on Twitter by InSeason Fish, a community that promotes love for seafood with environmental conservation. The video has got over 4,000 views by now and is likely to go viral. It shows the efforts of fishermen who are trying hard to tie the fish to help release it back into the waters. The fishermen strive as the tail of the massive fish keeps hitting them, but after a while, they successfully release it back into the sea. Puducherry: 18-Foot-Long Whale Shark Dies After Getting Trapped in Fishing Net, Buried.

Such efforts need to be recognised on a large scale. Back in May 2019, when a group of fishermen from Raigad caught a 25-foot-long whale shark, they cut their nets to release the big fish. The state government were considering rewarding these men with Rs 25,000 compensation for loss of their equipment. In 2018 too, a group of fishermen from Kochi has released a net large shark back into the sea after they realised it is an endangered species.

Coming in about the species of the fish, the whale shark the largest known existing fish species. It is the only extant member of the family Rhincodontidae. It is considered endangered by the IUCN due to the impacts of fisheries, by-catch losses, and vessel strikes, combined with its long lifespan and late maturation.