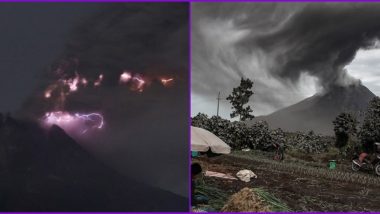 The Mount Sinabung in Indonesia's Sumatra Islands has erupted again in five days. The volcanic mountain spewed massive ash clouds five days ago on August 15 and the activity has continued since then. On Friday, August 14, it erupted again but not in as much as intensity as the first eruption. Pictures have also captured a lightning strike the mouth of the volcanic crater. After the initial eruption, massive ash clouds blanketed the region in the darkness in the middle of the day. Pictures and videos of the situation were shared on social media. Residents around are on alert and flights have also been given warnings as activity continues.

The activity on this stratovolcanic mountain has been continuing for the last two days. The mountain continues to spew ash in the Northern Sumatran region. It erupted thrice on Thursday morning as per reports. The volcano has been rumbling right from its first activity which was after about a year. The National Disaster Mitigation Agency has said that there is potential for more eruptions and the crater's alert status is at the second-highest level. Recent pictures have also captured the moment lightning struck at the mouth of the crater while the grey ash spews out. Filipino Couple Gets Married With Dramatic Taal Volcano Smoke Cloud in the Background; Surreal Wedding Pics Go Viral.

The pictures look amazing as a nature's phenomenon, but also scary. There is a five km no-go-zone around here to prevent loss in case of severe volcanic activity. The volcanic mountain erupted in 2010 after a gap of 400 years. It had caused damage back in 2016 when it erupted. This year, the activity comes after a spell of a year.

(The above story first appeared on LatestLY on Aug 15, 2020 08:08 PM IST. For more news and updates on politics, world, sports, entertainment and lifestyle, log on to our website latestly.com).