Yet another mysterious metal monolith has been found on a riverbank in the Polish capital Warsaw. Found along the banks of Vistula river, this monolith grabbed the attention of the joggers and passers-by. 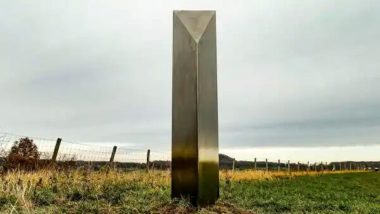 Yet another mysterious metal monolith has been found on a riverbank in the Polish capital Warsaw. Found along the banks of Vistula river,  this monolith grabbed the attention of the joggers and passers-by. This one comes as the latest addition to all the other similar objects found one after the other in Europe and the US. Joggers noticed the triangular pillar during their morning run along the Vistula river and now the pictures and videos of the massive object are going viral online. "What is A Monolith? Utah Monolith Location? Know The Meaning of This 'Mysterious' Geological Structure And Famous Monoliths Across Countries.

It is said to be three metres (10 feet) tall and has a dull silver-coloured surface. It is said to be held together by screws and is planted in the sand of the riverbank near a major bridge. Warsaw's Vistula district authorities said on their Facebook page: "A mysterious and unusual installation has emerged on the beach on the right (river) bank. If you spend your time actively on the Vistula river, it won't escape your attention".

No one claimed responsibility for the installation as of Thursday. Similar monoliths are cropping up in the United States, Romania and Britain. The first structure made news after it appeared briefly in the Utah desert followed by similar objects found in southern California and Romania days later. The monoliths have people making memes!

Yet another #monolith found in Warsaw, Poland. That brings the # up to at least 8:

By The River Bank

The mystery continues. Two metal monoliths, similar to those which were seen in US and other places are now seen in Poland. Inspite of many days the reason is not cleared . #mysteryofmonolith #monolith #minolithinpoland #unsolvedmysteries #mysterycontinues. pic.twitter.com/yDo1TwhZPk

Mysterious #monoliths have appeared in #Poland. A 3-metre tall metallic monolith was spotted on Vistula’s river bank in #Warsaw. Another at Kadzielnia nature reserve in #Kielce. The installations have also sprung up in various parts of the world.

Recently one appeared on a beach on the Isle of Wight off the south coast of England on Sunday. The appearance of the Utah object in late November sparked rumours of alien visitations by conspiracy theorists as it resembeled to the black monolith in the Stanley Kubrick science fiction film "2001: A Space Odyssey". Recently, a gold monolith was discovered in Chia and the photos and videos had gone viral on social media platforms. The first monolith disappeared after being spotted in Utah and then Monoliths later began appearing and disappearing in Romania, Netherlands and many other places.  Footage of men dismantling the Utah monolith in the US had gone viral recently. Days after that incident happened, another metallic structure appeared at Pine Mountain in Atascadero, California.  the monolith spotted in Romania vanished too.  Well, now we can just wait for the next monolith to appear!

(The above story first appeared on LatestLY on Dec 11, 2020 10:13 AM IST. For more news and updates on politics, world, sports, entertainment and lifestyle, log on to our website latestly.com).