Not Again! Monolith Mysteriously Appears in Wisconsin Near a Hiking Trial Only to Disappear, Pics of the Giant Structure Amid the Snowscape Go Viral

Another monolith appeared in US state Wisconsin. Visitors were baffled to see the 8 to the 9-foot-high monolith that turned up at the hiking trail. But the structure dissapeared, without leaving any trace behind. 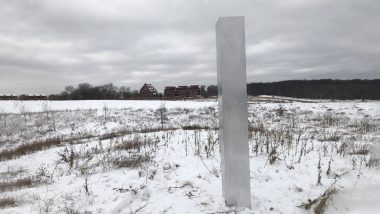 The monolith mystery continues to puzzle people. Even though, not all the past findings mysteries were solved, another one appeared in US state Wisconsin near a hiking trail, but only to disappear. Yes, before hikers could embrace the newly discovered structure, it was gone. However, the monolith was not made of metal, unlike the previous ones discovered across the world, but cardboard or plywood over a wood frame. The sudden disappearance of the structure has puzzled people across the state, and the pictures of the monolith are now going viral.

Monoliths have been mystifying people across the world by its sudden appearance. Some even vanished without leaving any trace as to where it might have gone. To what started from Utah, the mystery continued to unfold in several places, sci-fi lovers wondering if it was aliens doing it. However, videos surfacing on the internet clarified that in Utah it was surely not aliens but four men behind the disappearance of the monolith. They dismantled the shiny structure.

The latest monolith that is part of the global trend was discovered reportedly at the County Grounds Park in Wisconsin. Visitors were baffled to see the 8 to the 9-foot-high monolith that turned up at the hiking trail. The lack of snow atop the structure indicated that it was installed sometime after the snowfall. Unlike the other monoliths, that appeared in UK, Texas, Poland, California and more, the recent one was not made of metal but cardboard of plywood covered in aluminium foil. It disappeared without leaving any trace.

Here's the Pic of the Monolith!

Thought everyone should know that there’s now an 8-foot monolith in the County Grounds Park in Wauwatosa. pic.twitter.com/HCkJeyzHqH

The Monolith is Gone!

Did not find it pic.twitter.com/11DdQmOpuU

The disappearance of the monolith is also quite in trend much like others which vanished days after being reported. Last year, an artist group claimed responsibility for the ‘mysterious’ installations across the world. The monolith even travelled to India, at a park in Ahmedabad.

(The above story first appeared on LatestLY on Jan 08, 2021 10:53 AM IST. For more news and updates on politics, world, sports, entertainment and lifestyle, log on to our website latestly.com).