Zoo in Cairo Paints Donkeys Black and White to Pass Them Off As Zebras, Director Denies They Are Fake!

The animal has long ears and a mane. A closer look at the picture, it reveals how they have painted a common donkey in black and white stripes to make it look like a zebra! 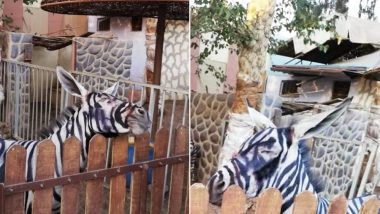 The zebras in Cairo are actually donkeys (Photo credits: Facebook/Mahmoud A. Sarhani)

Zebras are relatively uncommon to spot easily in a park or a zoo. But to have one, a zoo in Cairo made a ridiculous attempt by painting a donkey black and white! The incident came to light when a student from Cairo posted a picture on his Facebook page of the 'strange-looking' zebra which he saw in Cairo’s International Garden municipal park. The animal has long ears and a mane. A closer look at the picture, it reveals how they have painted a common donkey in black and white stripes to make it look like a zebra!

The zoo also trimmed the mane of the donkey to make it look little pointed so it matches the look of a zebra. But this cover-up could not have lasted long due to the hot weather in the area. The paint has smudged and the zoo's ridiculous efforts have come to fore. The photo shared by the student, Mahmoud A. Sarhani, quickly went viral and most people found it funny.

Take a look at the picture of the donkey painted black and white to look like a zebra:

After the photo went viral even other media covered it and began to find out more about it. One of the FM radio stations managed to contact the director for an explanation about this. Mohamed Sultan, the director of International Gardens park, however, denied that the zebra was fake. But a lot of veterinarians confirmed that the animal was a donkey and not an original zebra. It is indeed sad how the zoo has resorted to such tricks, not realising how dangerous it could be for the donkey. While the incident does across as a funny one, it needs some serious action. What do you think about this zebra or actually a donkey?

(The above story first appeared on LatestLY on Jul 25, 2018 04:56 PM IST. For more news and updates on politics, world, sports, entertainment and lifestyle, log on to our website latestly.com).