England left-arm spinner Jack Leach has credited new Test captain Ben Stokes and head coach Brendon McCullum for his superb performance in the ongoing third Test against New Zealand here, saying while he always had the self-belief, the two had helped him gain further confidence in his abilities. 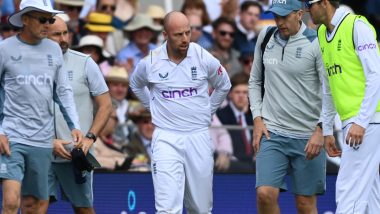 Headingley, June 27 : England left-arm spinner Jack Leach has credited new Test captain Ben Stokes and head coach Brendon McCullum for his superb performance in the ongoing third Test against New Zealand here, saying while he always had the self-belief, the two had helped him gain further confidence in his abilities. Leach had come into the third Test on the back of unimpressive showing in the two previous Tests against the Kiwis, and there were calls for him to be replaced after the series. But the 31-year-old completed a career-best 10-wicket match haul at Headingley to set England on course for a clean sweep of the series against the Black Caps. Virat Kohli Unlikely To Lead if Rohit Sharma Is Unwell for Rescheduled Test, Says His Childhood Coach .

Leach, who took five wickets in each innings of the Headingley Test, said he had not thought he would be able to come up with such a fine performance and would play a pivotal role in putting the hosts in command of the match. "I don't know if I thought it was possible or not (to take 10 wickets in a Test), probably not. My biggest thing is having belief in myself and that's what Ben (Stokes) and Baz (McCullum) have really helped me with and it looks like it's starting to pay off," Leach was quoted as saying by Daily Mail. How To Watch ENG vs NZ 3rd Test 2022, Day 5 Live Streaming Online and Match Timings in India: Get England vs New Zealand Cricket Match Free TV Channel and Live Telecast Details.

England need just 113 more runs on Day 5 on Monday to complete a series whitewash after Ollie Pope (81 not out) and Joe Root (55 not out) complemented Leach's efforts of 5/66 in the second innings. "We need to get a win and then it will be very special. It probably hasn't sunk in (10-wicket haul) but it's just great to be out there. And then Pope and Root -- that was special batting. It was really good (to watch), until the last 20 minutes when I had my pads on as nightwatchman," added Leach. Leach has become the first England tweaker to take 10 wickets in a Test since Moeen Ali achieved it in 2017. "I'm really enjoying it. I've felt I'm more attacking. In the past I might have felt I needed a bit of protection to bowl attackingly. The way we're going about things, which is credit to Stokesy and Baz (McCullum), is taking the positive option," he added.

(The above story first appeared on LatestLY on Jun 27, 2022 03:50 PM IST. For more news and updates on politics, world, sports, entertainment and lifestyle, log on to our website latestly.com).