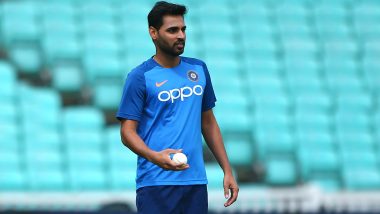 New Delhi, May 24: Apart from being one of the best fast-bowlers in the country, Bhuvneshwar Kumar is also the answer to a trivia question related to batting legend Sachin Tendulkar.

In his illustrious domestic career, Tendulkar was dismissed for a duck for the first time in the Ranji Trophy only in the 2008-09 season in a match against Uttar Pradesh.

It was 19-year-old Bhuvneshwar who took the wicket. Four years later, he would burst on to the international scene by dismissing Pakistan's Mohammad Hafeez off his first delivery in ODI cricket.

Bhuvneshwar, however, credits then Uttar Pradesh captain Mohammed Kaif for the wicket of Tendulkar.

"Generally, you think to claim wickets before the start of any game, but you don't plan to bag a certain number of wickets as it's not possible," Bhuvneshwar said during the chat show aDouble Trouble,' a YouTube programme hosted by Smriti Mandhana and Jemimah Rodrigues.

"But when it comes to Sachin's wicket, then I would say I was lucky because the position where Sachin got out was neither short-leg nor mid-wicket, so the credit goes to Mohammad Kaif who was my captain at that time.

"He set the field, and I just bowled an inswinger, and eventually, it happened," Bhuvneshwar added.

(The above story first appeared on LatestLY on May 24, 2020 02:06 PM IST. For more news and updates on politics, world, sports, entertainment and lifestyle, log on to our website latestly.com).