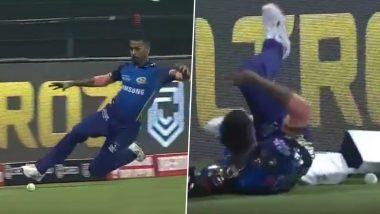 Mumbai Indians put up an emphatic show against Kolkata Knight Riders at the Sheikh Zayed Stadium in Abu Dhabi and registered their first win of Dream11 Indian Premier League (IPL 2020). Jasprit Bumrah was one of the chief architects of MI’s victory as the pacer bowled a sensational spell and dismissed Eoin Morgan and Andre Russell in the same over. While his bowling performance earned praises by fans, his fielding effort didn’t impress Hardik Pandya. The star all-rounder lashed out at Bumrah after the latter failed to stop a ball while fielding in the inner circle. KKR vs MI Stat Highlights IPL 2020: Rohit Sharma Smashes 200th Six as Mumbai Indians Defeat Kolkata Knight Riders by 49 Runs.

The incident took place in the first ball of the 12th over. Kieron Pollard bowled a slower delivery to Eoin Morgan, and the latter guided the ball to backward point direction. Bumrah tried to stop the ball with his hands but failed. The ball went towards the third man region, and Pandya dived in desperation to control the ball. His effort, however, went in vain as the ball touched the boundary. While giving the ball back, a furious Hardik Pandya slammed Bumrah for his effort with his gesture. Mumbai Indians Top Team Standings After 49-Run Win, Fans Praise Defending Champions.

Coming to the game, Mumbai posted 195/5 while batting first thanks to a spectacular half-century from skipper Rohit Sharma. Suryakumar Yadav also played his part with a quick-fire 47. In reply, KKR never looked in the hunt as they kept losing wickets in regular intervals. In the end overs, Pat Cummins played some big shot, but the Australian only could minimise the margin of defeat. As a result, the four-time champions won the game by 49 runs and advanced to the pinnacle of team standings.

(The above story first appeared on LatestLY on Sep 24, 2020 04:37 PM IST. For more news and updates on politics, world, sports, entertainment and lifestyle, log on to our website latestly.com).