Opening the innings, Deepak Hooda struck an unbeaten 47 to help India hammer 111 runs in 9.2 overs and romp to a seven wickets win against Ireland in the rain-truncated first T20 International match here. 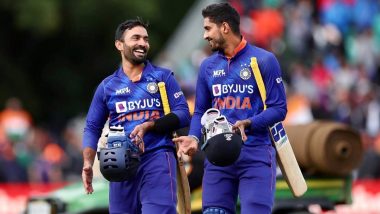 Dublin, June 27 : Opening the innings, Deepak Hooda struck an unbeaten 47 to help India hammer 111 runs in 9.2 overs and romp to a seven wickets win against Ireland in the rain-truncated first T20 International match here. Hardik Pandya had won the toss in Malahide on Sunday but persistent rain delayed the start of play and the game was reduced to 12-overs-per-side when the umpires finally found the conditions fit for play. India came up with a clinical bowling display to restrict hosts Ireland to 108/4 in 12 overs after inviting them to bat first. Hooda, usually a middle-order batter in IPL, struck a 29-ball 47, hitting six boundaries and two sixes, while fellow-opener Ishan Kishan (26) and skipper Pandya (24) made vital contributions as India reached 111/3 in 9.2 overs, winning the match with 16 deliveries to spare. Deepak Hooda Helps India Beat Ireland by 7 Wickets in a Rain Curtailed 1st T20I.

The visitors had handed young tearaway Umran Malik his debut but things did not start well as he gave away 14 runs in the only over he bowled. But the rest of the bowlers did well, with Bhuvneshwar Kumar (1/16) and Yuzvendra Chahal (1/11) comfortably the pick of the bowlers with their three overs apiece. The Ireland innings was boosted by an outstanding knock by Harry Tector, who reached his half-century in the final over before smashing two further boundaries to finish on 64 not out from just 33 balls. Tector blasted six fours and three sixes during his 50-minute effort.

Chasing 109, India lost Ishan Kishan (26) and Suryakumar Yadav (0) in quick succession as the experienced Craig Young did the damage to reduce the visitors to 30/2. However, India -- despite missing a number of star players who are currently in England with the Test squad -- have too much depth and talent to get rattled by the early setback. While Hooda kept going at one end, captain Pandya did not allow the required rate fall with a 12-ball 24, blasting three sixes. Hardik Pandya Becomes First Indian Captain To Take a Wicket in T20I Cricket During IND vs IRE Encounter.

Though he was trapped lbw by Josh Little, India -- 94/3 in 7.6 overs -- were already in a comfortable position. Hooda provided the finishing touches by hitting back-to-back fours to bring up the win, remaining unbeaten on 47 off 29 deliveries. The teams will meet again at the same ground in Dublin on Tuesday for the second T20I, where they will be hoping the rain stays away to get the full allocation of overs in.

(The above story first appeared on LatestLY on Jun 27, 2022 08:33 AM IST. For more news and updates on politics, world, sports, entertainment and lifestyle, log on to our website latestly.com).