New Zealand batter Devon Conway has said that he feels special when he is compared with former Australian cricketer Michael Hussey, who is now the Chennai Super Kings batting coach after having a long association with the IPL franchise as a player. 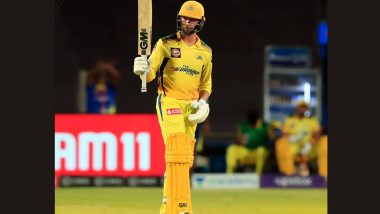 Mumbai, May 9: New Zealand batter Devon Conway has said that he feels special when he is compared with former Australian cricketer Michael Hussey, who is now the Chennai Super Kings batting coach after having a long association with the IPL franchise as a player. Hussey, a left-hand batter, played 79 Tests and scored more than 6000 runs, besides also representing Australia in 185 ODIs and 35 T20Is. The 46-year-old averaged a superb 51.52 in Tests, while in ODIs he scored over 5.400 runs at an average of 48.15. LSG vs GT Dream11 Team Prediction IPL 2022: Tips To Pick Best Fantasy Playing XI for Lucknow Super Giants vs Gujarat Titans Indian Premier League Season 15 Match 57.

In IPL, Hussey aggregated more than 1,900 runs in 58 innings, with his highest being an unbeaten 116. On Sunday, Conway scored a superb 49-ball 87 for CSK against the Delhi Capitals at the DY Patil Stadium to help win the match by 91 runs. Conway also bagged the Player-of-the-Match award. "Yeah, I think I have heard (comparison with Hussey) that a few times now which is quite good. To get compared to one of the greats, Mike Hussey is pretty special to be possibly in that bracket. I think he has got so much knowledge and so much experience not only in the IPL but throughout the world. Just very important for me as a player to continue talking to him and learning from him and just getting some guidelines when I need it," said Conway, for whom this was his third consecutive half-century in IPL 2022.

The 30-year-old Conway expressed confidence that CSK, four-time IPL champions, will come back stronger next year, given the quality of the players. Though, CSK are technically not out of IPL 2022, they need to win their three remaining games and hope for favourable results from the other teams to qualify for playoffs. "Certainly I think we have got a very strong team, a very strong squad. The results have not quite gone our way this year. We are not quite out of the competition though. We have some seriously classy players in the setup with good experience and really good young guys coming through. So, there is no doubt that we will come back stronger next year and play some really good cricket," added Conway. IPL 2022 Exploits of England Players Could Become a Template for Their Success in T20 World Cup 2022.

Conway also shared his blueprint for success with the bat. "For me the key is to try and be very simple and authentic to myself as a player. My blueprint is quite simple. In the first 6 overs try and play strong cricket shots, analyze the situation, the surface, the conditions, and just keep up the communication with Rutu (Ruturaj) at the other end. He is a class player and really calm at the crease. So, him and I have some good chats out in the middle. So, we complement each other quite nicely out in the middle," added Conway.

Conway also said that initially CSK wanted to carry an extra pacer since both Deepak Chahar and Adam Milne were injured, and head coach Stephen Fleming had asked him to be ready for any opportunity that might present itself. "Yeah, I think the reason for it was due to the combination of the team. We needed to find a good balance. We were a couple of bowlers short. Deepak Chahar was injured, Adam Milne was injured as well, and it was important for us to try and fill those gaps as best as possible, and that meant that we had to carry an extra bowler as an overseas option. So, it was quite understandable. The message was clear from Stephen Fleming that I needed to make sure to be ready for any opportunity that may present itself in the future. And, I think with my wedding as well, sort of made it, the fact that I needed to be away for a handful of games as well. So, it was good just to support the guys from the sidelines, and I was very fortunate to go to South Africa and get married as well."

(The above story first appeared on LatestLY on May 09, 2022 04:03 PM IST. For more news and updates on politics, world, sports, entertainment and lifestyle, log on to our website latestly.com).