India may seem to have lost the initiative in the rescheduled fifth Test against England here but two key performers in the side, Rishabh Pant and pace bowler Mohammed Siraj, have been outstanding in the high-stakes game. 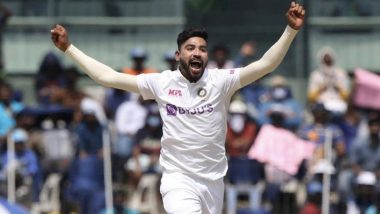 Edgbaston, July 5 : India may seem to have lost the initiative in the rescheduled fifth Test against England here but two key performers in the side, Rishabh Pant and pace bowler Mohammed Siraj, have been outstanding in the high-stakes game. While Pant's 146 off 111 deliveries will be remembered for years to come, the 28-year-old Siraj may have further cemented his place in the India Test squad after his four-wicket haul in the first innings. Siraj's brother Ismail has revealed about the pace bowler's evolution over the last two years, saying that, at times, he himself is "shocked" to see the aggression in the cricketer's eyes. IND vs Eng 5th Test: ECB, Warwickshire to Investigate Reports of Racist Abuse in Crowd at Edgbaston.

"Jo aggression uski aankon mei hota hai, kabhi kabhi hum log bhi ghar pe shock ho jate hain (Sometimes, we at home are shocked by the aggression in his eyes). Whenever he hears Arabi Marfa on the streets, he automatically starts dancing. Doesn't matter who's getting married," said Ismail on royalchallengers.com. Ismail is not the only one who has spoken about Siraj's aggression in recent times. Legendary cricketers such as Sachin Tendulkar, Ricky Ponting and Virat Kohli have been appreciative of the kind of infectious energy that Siraj brings to the table. After India secured a win against England at Lord's last year, with Siraj playing a pivotal role, the then-India skipper Kohli had said, "This is exactly who he is. He's going to be the kind of bowler who is aggressive, who is in your face and who is looking to get guys out. He is not scared and he is not going to take a backward step."

Talking about the change of aggression the moment he is hit for a boundary. Ismail said, "He always had that junoon (passion)... matlab pagalpan (meaning madness) but the Siraj of now is very different from the Siraj of before." Ismail said that Siraj was now a complete package of aggression, passion and a cricketer whose mindset has evolved over the past couple of years. India vs England, 5th Test 2022 Stat Highlights: BazBall-Inspired England Close In on Massive Chase To Script History After Day 4.

"Mentally. Ye pehle aisa nahi thha (He wasn't like this before). He's tough mentally and physically now. What he went through in Australia... losing his father when he was stuck in a room during quarantine and couldn't meet anyone else... to tackle such a tough situation on your own is a big deal. And the way he's been performing after that, he's certainly grown mentally stronger," said Ismail. "He says that the only thing that's on his mind now is what our father always told him, to make his country proud and give his 100 per cent every time."

(The above story first appeared on LatestLY on Jul 05, 2022 11:35 AM IST. For more news and updates on politics, world, sports, entertainment and lifestyle, log on to our website latestly.com).