Ravi Shastri will continue in his role as the head coach of the Indian cricket team, announced the Kapil Dev-led Cricket Advisory Committee in a press conference on Friday. Shastri, who was widely expected to be given an extension and was leading the race for the head coach's role as announced by Dev as the new head coach for the team. 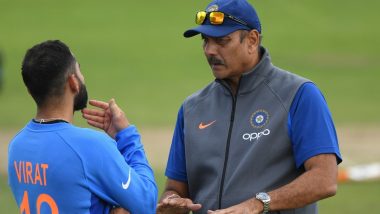 Ravi Shastri will continue as the head coach of the Indian national cricket team, announced the Kapil Dev-led Cricket Advisory Committee at a press conference on Friday. Shastri, 57, was widely expected to be given the extension ahead of other candidates Mike Hesson and Tom Moody after CAC member Anshuman Gaekwad and Virat Kohli had publicly backed him. The BCCI constituted CAC announced their decision after conducting interviews with the selected top-six candidates. Former New Zealand coach Mike Hesson came second in the race, while Tom Moody finished third. Ravi Shastri Funny Memes Go Viral Ahead of BCCI’s Team India Head Coach Selection Announcement.

Shastri, who was appointed the head coach for the first time in 2017, has been re-elected till the 2021 T20I World Cup. He will be in his fourth stint with the Indian national cricket team, having served as a team manager and team director in his first two stints. He was the Indian team’s cricket manager for a brief period in 2007 and served as the team’s director from 2014-2016 before being selected as the head coach in 2017.

The 57-year-old took over the coaching’s role following the resignation of Anil Kumble. Kumble stepped down from the role after the heart-breaking Champions Trophy defeat to Pakistan in 2017. Shastri will be in this position till the 2021 T20I World Cup. His initial contract as the head coach for the national cricket team expired after the 2019 ICC Cricket World Cup but Shastri and his support staff were given a 45-day extension period. India crashed out of CWC 2019 following an 18-run semi-final defeat to New Zealand.

Under his tenure, India reached the no. 1 rankings in both Tests and ODIs (for a brief period) and also scripted a famous Test series victory in Australia for the first time in 71 years. India also won the ODI series in South Africa to add to their victories in Sri Lanka and West Indies. India played 21 Test matches and won 13 of them, while in ODIs it was 43 out of 60 and 25 from 36 T20 internationals under the former Indian international.

(The above story first appeared on LatestLY on Aug 16, 2019 06:28 PM IST. For more news and updates on politics, world, sports, entertainment and lifestyle, log on to our website latestly.com).