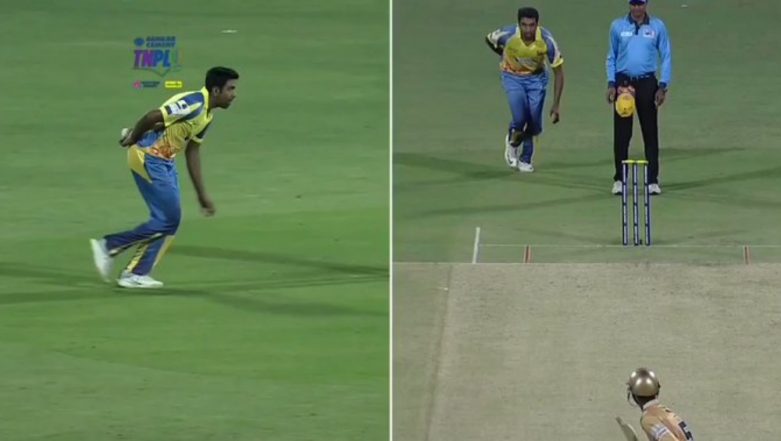 In contemporary cricket, bowlers, be it a fast-bowler or a spinner, need to have variations in their armoury. Bowlers around the world work hard and develop their skills, especially spinners who try to find new ways to outfox a batsman. Indian Test cricketer Ravichandran Ashwin is no different and is seen constantly working on new variations. The 32-year-old even modified his action in the past. R Ashwin Stuns Cricket Fans With Strange Bowling Action During Tamil Nadu Premier League 2019 Dindigul Dragons vs Chepauk Super Gillies Match (Watch Video).

Meanwhile, in the ongoing Tamil Nadu Premier League 2019 (TNPL 2019), Ashwin came up with a strange bowling action while bowling 20th over of the innings. The gifted spinner was seen hiding the ball behind his back during his stride to deliver the ball. The veteran spinner was successful in scalping a wicket with his mystery ball.

Ashwin is currently plying his trade for Dindigul Dragons franchise in the TNPL 2019. The video of Ashwin’s strange action was shared on official TNPL social media channels.

My experiments with the ball - Ft. @ashwinravi99!

A few days back, Ashwin used similar tactics to catch the batsman off guard. The off-spinner delivered the ball without completing his action. It appears Ashwin is making good use of the T20 league to try out various bowling actions and variations.

Meanwhile, Ashwin was named in India's Test squad for the upcoming three-match series against West Indies. Of late Ashwin is being considered for longer format only. He played his last One-Day International (ODI) against West Indies in 2017. The spinner’s last T20I appearance was also during the same tour.